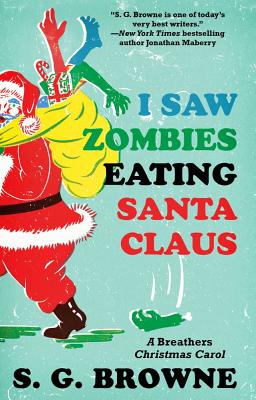 By S.G. Browne
Email or call for price
Hard to Find

Just in time for the holidays—a hilarious Christmas novella and sequel to the author’s highly acclaimed Breathers, “a zombie comedy with brains” (Kirkus Reviews).

How does the leader of a failed zombie civil rights movement from California rescue a group of his undead brethren and help a lonely Breather girl as he hides from a band of medical researchers while disguised as Santa Claus?

If you’ve never believed in Christmas miracles, then you wouldn’t understand.

Andy Warner has just escaped from a zombie research facility in Portland, Oregon, where he’s been subjected to experimental testing for the past year. With Christmas just days away, Andy figures that donning a jolly old St. Nick costume to throw off his would-be captors is just the ticket. But he never expects to encounter a sweet, lonesome nine-year-old girl who not only reminds Andy of the family he’s lost but who thinks he’s the real Santa. He also doesn’t count on being recognized as last year’s national quasi-celebrity by a clandestine group of decaying supporters who look to him for leadership. For the living and the undead, this unforgettable holiday tale will truly put on display just who is gnawing and who is nice. . . .

Readers with a certain seasonal sensibility—one that renders zombies appropriate fare no matter the date on the calendar—will be shouting Ho! Ho! Ho!”

“If your idea of ‘heart-warming’ involves an organ roasting on a stick, I Saw Zombies Eating Santa Claus is the perfect holiday tale.”

“Hilarious, horrifying…a must for anyone who can't get enough of the undead.”

“An endearing storyline….Get out your wallet and secure I Saw Zombies Eating Santa Claus for your nearest and dearest zombie freaks.”

“Dark, bizarre, very funny, and yes, with a bit of sentimentality thrown in, I Saw Zombies Eating Santa Claus is the perfect Christmas read for those who like VERY black comedy in their holiday reading.”

This feature require that you enable JavaScript in your browser.
END_OF_DOCUMENT_TOKEN_TO_BE_REPLACED

This feature require that you enable JavaScript in your browser.
END_OF_DOCUMENT_TOKEN_TO_BE_REPLACED