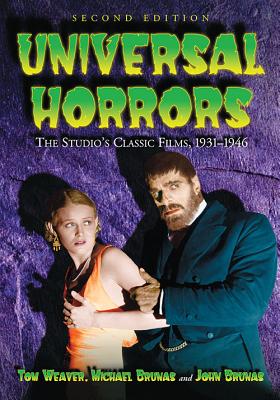 Revised and updated since its first publication in 1990, this acclaimed critical survey covers the classic chillers produced by Universal Studios during the golden age of hollywood horror, 1931 through 1946. Trekking boldly through haunts and horrors from The Frankenstein Monster, The Wolf Man, Count Dracula, and The Invisible Man, to The Mummy, Paula the Ape Woman, The Creeper, and The Inner Sanctum, the authors offer a definitive study of the 86 films produced during this era and present a general overview of the period. Coverage of the films includes complete cast lists, credits, storyline, behind-the-scenes information, production history, critical analysis, and commentary from the cast and crew (much of it drawn from interviews by Tom Weaver, whom USA Today calls the king of the monster hunters). Unique to this edition are a new selection of photographs and poster reproductions and an appendix listing additional films of interest.

This feature require that you enable JavaScript in your browser.
END_OF_DOCUMENT_TOKEN_TO_BE_REPLACED

This feature require that you enable JavaScript in your browser.
END_OF_DOCUMENT_TOKEN_TO_BE_REPLACED