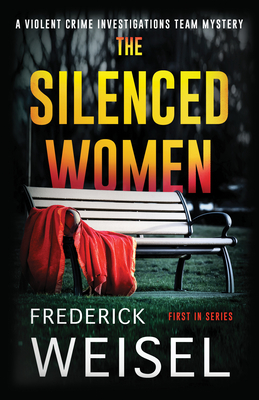 This is book number 1 in the Violent Crime Investigations Team Mystery series.

Who will speak for those who no longer can?

When a young woman is found strangled to death and left on a park bench in Santa Rosa, California, Detective Eddie Mahler and his Violent Crime Investigations Team are called to the scene. The crime immediately thrusts Mahler back to two unsolved homicides—young women who were also strangled—at this same location a couple of years earlier. He knows who was responsible, but his inability to find evidence to stop the serial killer has haunted him ever since.

Now suffering from chronic migraines that affect his vision, Mahler has secretly lost faith in the investigation process, and must rely more than ever on his team. Its newest member, Eden Somers, is a former FBI analyst whose ability to completely immerse herself in the evidence of a case proves both a gift and a curse. While Eden dives deep into the cold case evidence, the rest of the team chase leads to identify the latest victim, and discover that her death might be the work of a new killer altogether.

Now Mahler and his team are fighting on two fronts to discover who stole the very breath from these women, and to stop the killer before he silences another victim.

"A great start to a new series." — Spooky's Maze of Books

"In this propulsive debut, Weisel writes evocatively about a detective in crisis, a complex crime, and a city pushed to the edge by a killer's grip. With The Silenced Women, you're in for a smart and gritty ride." — Zoë Ferraris, author of Finding Nouf

"The debut of a promising new series, THE SILENCED WOMEN is a timely and compelling police procedural." — Jeff Abbott, New York Times bestselling author of Never Ask Me

"The discovery of a young woman's body in a public park in Santa Rosa, Calif., drives Weisel's strong debut and series launch...Bolstered by careful attention to detail and authentically drawn characters, this finely paced story builds to a satisfying finale. Police procedural fans will look forward to more." — Publishers Weekly

"Weisel delivers sensitive and well-developed portrayals of the beleaguered detectives, without skimping on the action." — Booklist

"Weisel's debut thriller is a crackling how-catch-'em, stacking equally intelligent and tenacious adversaries on both sides of the law, then setting them loose on each other." — Joseph Schneider, author of the critically acclaimed LAPD Detective Tully Jarsdel Mysteries

"This start of a cinematic new series is an intense police procedural. Readers will be immersed in the investigation by a talented team, while also privy to the actions of a brilliant killer. " — Library Journal

This feature require that you enable JavaScript in your browser.
END_OF_DOCUMENT_TOKEN_TO_BE_REPLACED

This feature require that you enable JavaScript in your browser.
END_OF_DOCUMENT_TOKEN_TO_BE_REPLACED