Essentials of Statistics for the Behavioral Sciences (Paperback) 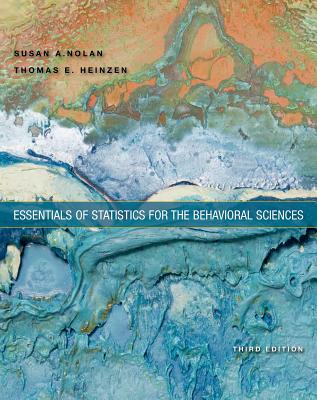 Get introduced to the how and why of statistical practice in the behavioral sciences as Essentials of Statistics for the Behavioral Sciences uses storytelling and real-world examples to reinforce the material for you to comprehend easier.

Susan A. Nolan is Professor of Psychology at Seton Hall University in New Jersey. A graduate of the College of the Holy Cross, she earned her Ph.D. in psychology from Northwestern University. Susan researches interpersonal consequences of mental illness and the role of gender in science and technology fields. Her research has been funded by the National Science Foundation. Susan served as a nongovernmental representative from the American Psychological Association (APA) to the United Nations for five years, and is Vice President for Diversity and International Relations of the Society for the Teaching of Psychology. She is the 2014 2015 President of the Eastern Psychological Association (EPA), and is a Fellow of both EPA and APA.Tom Heinzen is Professor of Psychology at William Paterson University of New Jersey. A graduate of Rockford College, he earned his Ph.D. in social psychology at the State University of New York at Albany. After publishing his first book on frustration and creativity in government, Heinzen worked as a public policy research associate, consulted for the Johns Hopkins Center for Talented Youth, and then began his teaching career. He founded William Paterson University s Psychology Club, established an undergraduate research conference, and has been awarded various teaching honors while continuing to write articles, books, and plays that support the teaching of general psychology and statistics. Heinzen, a fellow of the Eastern Psychological Association, is also the editor of Many Things to Tell You, a volume of poetry by elderly writers. His current research involves applying game design to higher education."

This feature require that you enable JavaScript in your browser.
END_OF_DOCUMENT_TOKEN_TO_BE_REPLACED

This feature require that you enable JavaScript in your browser.
END_OF_DOCUMENT_TOKEN_TO_BE_REPLACED