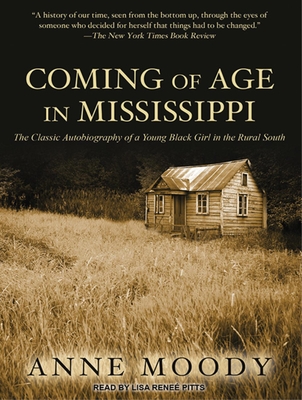 Born to a poor couple who were tenant farmers on a plantation in Mississippi, Anne Moody lived through some of the most dangerous days of the pre-civil rights era in the South. The week before she began high school came the news of Emmet Till's lynching. Before then, she had "known the fear of hunger, hell, and the Devil. But now there was the fear of being killed just because I was black." In that moment was born the passion for freedom and justice that would change her life.An all-A student whose dream of going to college is realized when she wins a basketball scholarship, she finally dares to join the NAACP in her junior year. Through the NAACP and later through CORE and SNCC she has first-hand experience of the demonstrations and sit-ins that were the mainstay of the civil rights movement, and the arrests and jailings, the shotguns, fire hoses, police dogs, billy clubs and deadly force that were used to destroy it.A deeply personal story but also a portrait of a turning point in our nation's destiny, this autobiography lets us see history in the making, through the eyes of one of the footsoldiers in the civil rights movement.

In addition to her autobiography, "Coming of Age in Mississippi," Anne Moody is the author of "Mr. Death: Four Stories."

Lisa Renee Pitts is an award-winning actress in theater, television, and film, as well as an accomplished audiobook narrator. She won an "AudioFile" Earphones Award for excellence in narration for "Pushkin and the Queen of Spades" by Alice Randall.

"Simply one of the best, Anne Moody's autobiography is an eloquent, moving testimonial to . . . Courage." ---Chicago Tribune

This feature require that you enable JavaScript in your browser.
END_OF_DOCUMENT_TOKEN_TO_BE_REPLACED

This feature require that you enable JavaScript in your browser.
END_OF_DOCUMENT_TOKEN_TO_BE_REPLACED