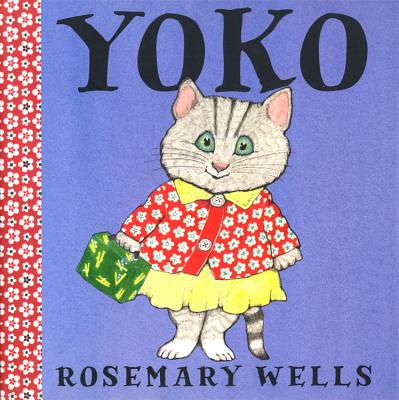 The charming, acclaimed book about a cat who is teased for the food she brings for school lunch—and that launched the beloved series about Yoko—is about accepting and embracing our differences.

Mmm, Yoko's mom has packed her favorite for lunch today--sushi! But her classmates don't think it looks quite so yummy. "Ick!" says one of the Franks. "It's seaweed!" They're not even impressed by her red bean ice cream dessert. Of course, Mrs. Jenkins has a plan that might solve Yoko's problem. But will it work with the other children in class?

"This brightly colored schoolroom charmer [is] a perfect book for those American-melting-pot kindergarteners who need to develop a genuine respect for one another's differences." —Publishers Weekly, starred review

Don't miss the other stories about Yoko, including Yoko Finds Her Way

Rosemary Wells's career as an author and illustrator spans more than thirty years and sixty books. She is the creator of such unforgettable characters as Ruby and Max, Noisy Nora, and Yoko. She has also given Mother Goose new life in the bestselling My Very First Mother Goose. She lives in Greenwich, CT.

* "As usual, Wells demonstrates a remarkable feel for children's small but important difficulties. Like the just-right text, her expressive watercolors, both panels and full-scale, capture a distinctive variety of animal children as well as the nuances in Yoko's expressions. Well's message is clear without being heavy-handed, making this brightly colored schoolroom charmer a perfect book for those American-melting-pot kindergartners who need to develop a genuine respect for one another's differences."—Publishers Weekly, starred review

"Wells's unerring sense of how children think and feel shines through. The lesson might have been labored; instead, Wells offers some trusty guidance and a light touch, and leaves the conclusions to readers."—Kirkus Reviews

This feature require that you enable JavaScript in your browser.
END_OF_DOCUMENT_TOKEN_TO_BE_REPLACED

This feature require that you enable JavaScript in your browser.
END_OF_DOCUMENT_TOKEN_TO_BE_REPLACED