50 Years a Keynesian and Other Essays (Paperback) 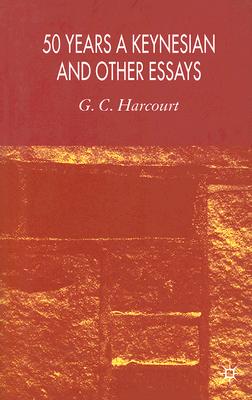 The author reviews retrospectively his developing ideas on theory and policy since he first encountered Keynes's writings in 1950. Topics covered include: Keynes now, specifically the coming back into favour of his most fundamental ideas; intellectual biographies and shorter tributes to economists; and a survey of Post-Keynesian thought.

G.C. HARCOURT is Emeritus Reader in the History of Economic Theory at the University of Cambridge, UK, Emeritus Fellow, Jesus College, Cambridge and Professor Emeritus, University of Adelaide, Australia. He is the author, co-author and editor or co-editor of nineteen books, including Some Cambridge Controversies in the Theory of Capital and the 2nd edition of The General Theory.

"The volume makes for reading which is both entertaining and thought-provoking...All economists, whether already familiar with the work of Geoff Harcourt and the key figures he discusses or not, would profit from reading this engaging volume."--Sheila Dow, The Economic Journal
"These essays are both highly informative and very useful pedagogically. But as one has come to expect from Harcourt, they are also delightfully entertaining reading...Harcourt's own virtuosity in this context is on display throughout the essays collected...It warrants a place on every economist's bookshelf."--Sean Turnell, Economic Record
"Serves up a rich menu of who's who and what's what in the Cambridge tradition, all of which Harcourt presents in a sympathetic and readable fashion...It is an invaluable source of intramural information for the historian of economic thought."--Peter Dooley, History of Economics Newsletter 2003
"The indefatigable Geoff Harcourt has done it again!...Needless to say, every university library should buy it."--J.E. King, History of Economic Review
"This documents the rich harvest of contributions to economic theory and policy of a remarkable scholar and human being...They are a fine tribute to the Australian Cantabrigian Keynesian to whom many economists, young and no longer so young, are indebted for his benevolence, support, inspiration and mentorship...Economists in general and historians of economic thought working on the Cambridge tradition in particular can be expected to benefit from this collection of essays of a fine scholar and Mensch."--Heinz D. Kurz, The European Journal of HET
"A beautifully produced volume...These essays provide interesting and sometimes provocative reading for a variety of audiences...This is a book no one interested in the development and the present state of the struggle between classicals and neoclassicals should miss."--Hansjorg Klausinger, History of Economic Ideas
"These essays contain an incredible wealth of fundamental and illuminating, often subtle points...There are a great many passages of enormous significance... A landmark on the way to a humanist Classical-Keynesian system of political economy."--Heinroch Bortis, Journal of Economic Studies
"A wonderful collection of wide ranging essays from the past decade demonstrating Geoff Harcourt's great knowledge of economic ideas and of major economists. These essays provide us with many insights into the life and work of some major economists and into the nature of the continuing Keynesian revolution."--Malcolm Sawyer, University of Leeds
"This collection of Geoff Harcourt's recent essays provides a vivid, sympathetic, and intellectually powerful portrait of a remarkable group of scholars who contributed to the creation of the broad post-Keynesian tradition in economics. I can think of no better general introduction to the work and lives of Nicholas Kaldor, Lorie Tarshis, Austin Robinson, Josef Steindl, and, especially, Joan Robinson. Harcourt shares with them the curiosity, iconoclasm, and passion for the public good that are the best part of the Keynesian tradition."--Duncan K. Foley, New School University
"Harcourt's contributions to economics are many, and this volume offers glimpses of those contributions, along with biographical essays on important economists and reflections on the intellectual battles with mainstream economics in which heterodox economists often find themselves. The essays in this volume give the reader a good sense of why Harcourt is considered one of the most influential Post Keynesians of the last century and remains so today. This book presents a vivid portrait of an important Post Keynesian who has dedicated his life to promoting intellectual discourse on the most vital and controversial issues of our time, and to keeping alive the Cambridge tradition in economic thought. Geoff's contributions are many, but his lifelong effort to make the world fairer and a better place is what finally stands out most clearly in this volume. As a post Keynesian, I can't think of a better role model."--Review of Political Economy

This feature require that you enable JavaScript in your browser.
END_OF_DOCUMENT_TOKEN_TO_BE_REPLACED

This feature require that you enable JavaScript in your browser.
END_OF_DOCUMENT_TOKEN_TO_BE_REPLACED