The Score Takes Care of Itself: My Philosophy of Leadership (Compact Disc) 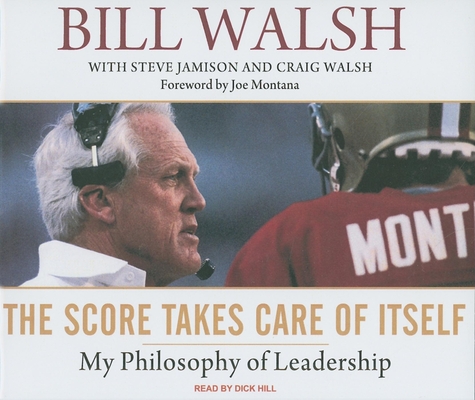 Bill Walsh was perhaps the most influential and successful coach in NFL history, transforming the San Francisco 49ers from the worst franchise in sports to a dynasty that won five Super Bowls. He is acclaimed not only for his strategic brilliance but also for his advanced approach to leadership. His teams sustained a consistency of excellence rarely seen in sports or anywhere else. Drawn from a series of deeply revealing conversations with coauthor Steve Jamison, The Score Takes Care of Itself offers Walsh's best leadership principles illustrated by anecdotes from his entire career. Additional insights and perspective are provided by his son Craig Walsh. A sample of Bill's wisdom: -Believe in people: No one will ever come back later and thank you for expecting too little of them. -Professionalism matters: There was no showboating allowed after touchdowns, no taunting of opponents, and no demonstrations to attract attention to oneself. -Keep a short enemies list: One enemy can do more damage than the good done by a hundred friends. -Leaders can't escape criticism: Ignore the undeserved. Learn from the deserved. Lick your wounds. Move on. It may hurt, but sometimes you can't have the last word. The book will delight football fans and guide the vast business audience eager to learn how Bill Walsh motivated individuals and crafted winning teams.

Steve Jamison is a bestselling author and America's preeminent authority on the leadership philosophy of UCLA's legendary coach John Wooden, whose basketball dynasty won ten March Madness national championships. Pro Football Hall of Famer Bill Walsh was head coach of the San Francisco 49ers from 1979 to 1989, with an overall record of 102 wins and 63 losses. Craig Walsh is a former marketing executive for the San Francisco 49ers and the current executive director of Santa Clara's Healthy Kids program.

Reader of over four hundred audiobooks, Dick Hill has won three coveted Audie Awards and been nominated numerous times. He is also the recipient of several "AudioFile" Earphones Awards. "AudioFile" includes Dick on their prestigious list of Golden Voices.

"A fascinating compendium of Walsh's philosophy.... Enlightening, informative and engaging, this powerful book is a must-[listen] for executives and managers at every level." ---Publishers Weekly Starred Review

This feature require that you enable JavaScript in your browser.
END_OF_DOCUMENT_TOKEN_TO_BE_REPLACED

This feature require that you enable JavaScript in your browser.
END_OF_DOCUMENT_TOKEN_TO_BE_REPLACED