So You Want to Be a Producer (Paperback) 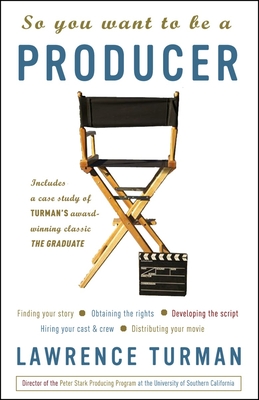 By Lawrence Turman
$17.00
Email or call for price.

Few jobs in Hollywood are as shrouded in mystery as the role of the producer. What does it take to be a producer, how does one get started, and what on earth does one actually do? In So You Want to Be a Producer Lawrence Turman, the producer of more than forty films, including The Graduate, The River Wild, Short Circuit, and American History X, and Endowed Chair of the famed Peter Stark Producing Program at the University of Southern California, answers these questions and many more.

Examining all the nuts and bolts of production, such as raising money and securing permissions, finding a story and developing a script, choosing a director, hiring actors, and marketing your project, So You Want to Be a Producer is a must-have resource packed with insider information and first-hand advice from top Hollywood producers, writers, and directors, offering invaluable help for beginners and professionals alike.

Including a comprehensive case study of Turman’s film The Graduate, this complete guide to the movie industry’s most influential movers and shakers brims with useful tips and contains all the information you need to take your project from idea to the big screen.

Lawrence Turman has produced more than forty films, including The Graduate, The River Wild, Short Circuit, and American History X, and is the Endowed Chair of the famed Peter Stark Producing Program at the University of Southern California.

“Turman has made smart, superior films for forty years. This is a no B.S., straight-forward, and clear guide to being a producer.” —Paul Newman, Oscar-winning actor

“Far more than a simple how-to book, Larry tells you what it really takes to get a movie made—and how you can make a career of making movies.” —Jeffrey Katzenberg, cofounder of DreamWorks and executive producer of Shrek 2 and Shark Tale

“Whether you’re just starting in this business or a seasoned professional, there is something to be learned from Larry’s book. This is a must-read!” —Jane Rosenthal, cofounder and producer of the Tribeca Film Festival

This feature require that you enable JavaScript in your browser.
END_OF_DOCUMENT_TOKEN_TO_BE_REPLACED

This feature require that you enable JavaScript in your browser.
END_OF_DOCUMENT_TOKEN_TO_BE_REPLACED