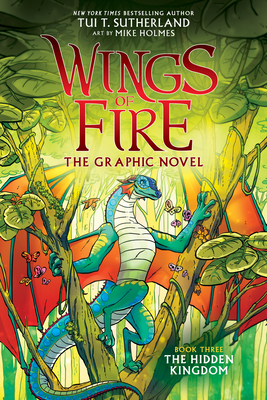 By Tui T. Sutherland, Mike Holmes (Illustrator)
$24.99
On Our Shelves Now at Some of Our Stores

This is book number 3 in the Wings of Fire Graphic Novel series.

The #1 New York Times bestselling Wings of Fire series soars to new heights in this third graphic novel adaptation!
Glory knows that the dragon world is wrong about her being "a lazy RainWing." Maybe she wasn't meant to be one of the dragonets of destiny, but Glory is sharp and her venom is deadly...even if that's still a secret.

So when the dragonets seek shelter in the rain forest, Glory is devastated to find that the treetops are full of RainWings that nap all day and know nothing of the rest of Pyrrhia. Worst of all, they don't realize -- or care -- that RainWings are going missing from their beautiful forest. But Glory and the dragonets are determined to find the missing dragons, even if it drags the peaceful RainWing kingdom where they never wanted to be -- into the middle of the war.

Praise for The Dragonet Prophecy (Wings of Fire Graphic Novel, Book One):

This feature require that you enable JavaScript in your browser.
END_OF_DOCUMENT_TOKEN_TO_BE_REPLACED

This feature require that you enable JavaScript in your browser.
END_OF_DOCUMENT_TOKEN_TO_BE_REPLACED