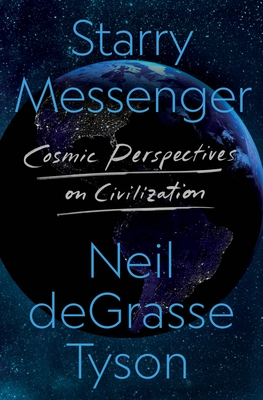 Bringing his cosmic perspective to civilization on Earth, Neil deGrasse Tyson shines new light on the crucial fault lines of our time—war, politics, religion, truth, beauty, gender, and race—in a way that stimulates a deeper sense of unity for us all.

In a time when our political and cultural views feel more polarized than ever, Tyson provides a much-needed antidote to so much of what divides us, while making a passionate case for the twin chariots of enlightenment—a cosmic perspective and the rationality of science.

After thinking deeply about how science sees the world and about Earth as a planet, the human brain has the capacity to reset and recalibrates life’s priorities, shaping the actions we might take in response. No outlook on culture, society, or civilization remains untouched.

With crystalline prose, Starry Messenger walks us through the scientific palette that sees and paints the world differently. From insights on resolving global conflict to reminders of how precious it is to be alive, Tyson reveals, with warmth and eloquence, an array of brilliant and beautiful truths that apply to us all, informed and enlightened by knowledge of our place in the universe.

Neil deGrasse Tyson is an astrophysicist and the author of the #1 bestselling Astrophysics for People in a Hurry, among other books. He is the director of the Hayden Planetarium at the American Museum of Natural History, where he has served since 1996. Dr. Tyson is also the host and cofounder of the Emmy-nominated popular podcast StarTalk and its spinoff StarTalk Sports Edition, which combine science, humor, and pop culture. He is a recipient of 21 honorary doctorates, the Public Welfare Medal from the National Academy of Sciences, and the Distinguished Public Service Medal from NASA. Asteroid 13123 Tyson is named in his honor. He lives in New York City.

“Every page is lit up by an original poetic imagination but bearing the unmistakable stamp of a rational mind, steeped in maths and science.”
—Richard Dawkins, author of The Selfish Gene and The God Delusion

“Handsome, gregarious and passionate about his subject matter, Neil deGrasse Tyson…meditates on what a life studying the majesty of the stars and the planets can teach us about how to deal with all the messy social and political conflicts bedeviling us here on Earth…Engaging as ever…He is lucidly down-to-earth and charmingly enthusiastic.”
—The Washington Post

“Tyson has become the most influential science communicator in the country.”
—Vox

This feature require that you enable JavaScript in your browser.
END_OF_DOCUMENT_TOKEN_TO_BE_REPLACED

This feature require that you enable JavaScript in your browser.
END_OF_DOCUMENT_TOKEN_TO_BE_REPLACED