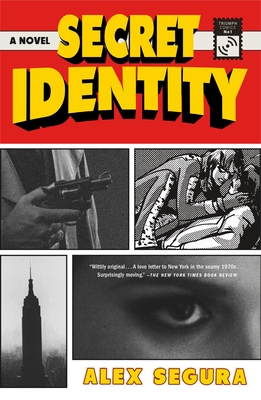 Named A BEST BOOK of the Year by NPR, The Sun Sentinel, Deadly Pleasures, and more

Anthony Award-winning writer Alex Segura delivers a "masterful 1970s literary mystery" (NPR) set in the world of comics that is "as engaging as Michael Chabon’s The Amazing Adventures of Kavalier & Clay.” (Sun Sentinel)

It’s 1975 and the comic book industry is struggling, but Carmen Valdez doesn’t care. She’s an assistant at Triumph Comics, which doesn’t have the creative zeal of Marvel nor the buttoned-up efficiency of DC, but it doesn’t matter. Carmen is tantalizingly close to fulfilling her dream of writing a superhero book.

That dream is nearly a reality when one of the Triumph writers enlists her help to create a new character, which they call “The Lethal Lynx,” Triumph's first female hero. But her colleague is acting strangely and asking to keep her involvement a secret. And then he’s found dead, with all of their scripts turned into the publisher without her name. Carmen is desperate to piece together what happened to him, to hang on to her piece of the Lynx, which turns out to be a runaway hit. But that’s complicated by a surprise visitor from her home in Miami, a tenacious cop who is piecing everything together too quickly for Carmen, and the tangled web of secrets and resentments among the passionate eccentrics who write comics for a living.

Alex Segura uses his expertise as a comics creator as well as his unabashed love of noir fiction to create a truly one-of-a-kind novel--hard-edged and bright-eyed, gritty and dangerous, and utterly absorbing.

Alex Segura is the SVP - Sales and Marketing at Oni Press and the author of Star Wars Poe Dameron: Free Fall and the acclaimed Pete Fernandez Mystery series. He has also written a number of comic books, most notably the superhero noir The Black Ghost, the YA music series The Archies, and the “Archie Meets” collection of crossovers. A Miami native, he lives in New York City with his wife and children.

"A unique fusion of noir and comic books set against the gritty backdrop of 1970s New York, Secret Identity is the kind of page-turner I know I'll binge-read." —Zakiya Dalila Harris

"Segura’s book works on so many levels, it’s almost hard to keep track—as a love letter to comic books, it’s as powerful as anything since Michael Chabon’s The Amazing Adventures of Kavalier & Clay (2000). And as a thriller, it’s smart, perfectly paced, and wonderfully atmospheric—Segura captures the intense, grimy milieu of 1970s New York with aplomb. You don’t have to be a comics fan to love this novel; it’s a masterful book filled with real heart and soul. A triumph."—Kirkus Reviews, Starred Review

"Darkest noir meets the vibrant world of comics in the hands of Segura... His reverence for the medium comes across vividly here.... A superlative one-of-a-kind novel." —Booklist

“Alex Segura is one of the great gentlemen of crime fiction. A calm and measured soul who happens to be a firecracker of a writer. Secret Identity is his best yet—a glowing love letter to Serpico-era NYC and the rock and roll frontier of the American comics industry. This is a writer at the top of his game.” —S. A. Cosby, bestselling author of Razorblade Tears

“Secret Identity is astonishingly entertaining. Electric prose, breathless pacing, and Sandy Jarrell’s stunning art make for a roof-top leaping read you won’t soon forget. As a comic vigilante fights for justice in a heartless city, her talented creator finds herself the target of men keen to cash in on her talent no matter the cost. The resulting dual narrative is beautifully spun and relentlessly gripping, reminding us that heroes and villains do exist—and we’re all quite capable of being both.” —PJ Vernon, acclaimed author of Bath Haus

“With Secret Identity, Alex Segura perfectly recreates the 1970s comics industry, while at the same time creating a unique new character in the center of that world, and giving her a murder to solve as she struggles with the sexism of her times. This book was a page-turner in the best ways, but the characters and their lives felt so real that I found myself wishing it would continue even past the mystery. A truly special noir book.” —Ed Brubaker, Eisner-winning writer of Criminal and Winter Soldier

“Taut, fast-paced and wildly entertaining, Secret Identity merges classic noir with the three-color world of superhero comics in a way that will delight fans of both.” —G. Willow Wilson, author of The Bird King and Alif the Unseen and co-creator of Ms. Marvel

“Comic books, murder, and that knife of noir that Alex Segura wields like a surgeon. Secret Identity is a new and beautiful exploration of genre, revealing the darkest depths of our true selves. This isn’t a book, it’s a full, daring experience.” —Brad Meltzer, bestselling author of The Lightning Rod

“A cleverly-plotted mystery meets the vibrant setting of the 1970s New York comics scene in Secret Identity. Alex Segura’s new novel explores the masks people wear in exquisite detail, and I loved everything about it.” —Kristen Lepionka, Shamus and Goldie Award-winning author of the Roxane Weary mystery series

This feature require that you enable JavaScript in your browser.
END_OF_DOCUMENT_TOKEN_TO_BE_REPLACED

This feature require that you enable JavaScript in your browser.
END_OF_DOCUMENT_TOKEN_TO_BE_REPLACED