The Manipulation of Choice: Ethics and Libertarian Paternalism (Hardcover) 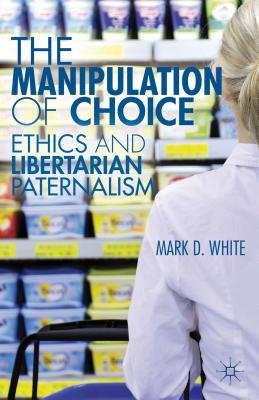 This timely book makes a forceful argument that the analyses from behavioral economists are incomplete, the policies advocated by libertarian paternalists are misguided and unethical, and both actually reinforce the cognitive biases and dysfunctions that motivate 'nudges' in the first place. In a lighthearted manner, the author points out critical flaws in the way economists model decision-making, how behavioral economics failed to correct them, and how they led to the problems with libertarian paternalism and nudges. Sprinkled throughout with anecdotes, examples, and references to a wide range of scholarly literature, this new volume argues against the use of paternalistic nudges by the government and makes a positive case for individual choice and autonomy. This book is part of White's triptych on individualism and society, which includes The Illusion of Well-Being and The Decline of the Individual.

Mark D. White is Chair of the Department of Philosophy at the College of Staten Island, City University of New York, USA, where he teaches courses in philosophy, economics, and law. He is the author of four books, including The Illusion of Well-Being (2014) and The Manipulation of Choice (2013), plus over forty journal articles and book chapters in the intersections between his three fields. He has also edited or co-edited a number of books, including Retributivism (2011), The Thief of Time (with Chrisoula Andreou, 2010), and Theoretical Foundations of Law and Economics (2009), and he is the editor of the Perspectives from Social Economics series at Palgrave Macmillan.

"The 'libertarian paternalism' theory promises to use the state to help correct citizens' wrong decisions without asking their consent, yet also without truly entering the realm of coercion. Too good to be true? Indeed it is, as this book helps to show. Mark White gives us the sort of analysis we need to nudge back." - Walter Olson, Senior Fellow, Cato Institute, USA

"The Manipulation of Choice states that paternalists impose their own values and goals onto hapless consumers and citizens. Hence, public policies designed to correct the imperfections of behavioral irrationality are coercive. This is an important point and one that needs to be debated." - Jonathan B. Wight, Professor of Economics and International Studies, University of Richmond, USA

"An important book on a timely topic. The Manipulation of Choice is an accessible book that is especially well suited for students. But it is also a welcome challenge to a currently fashionable theory that libertarians and paternalists alike should read with pleasure. Mark White . . . challenges the moral foundations of the entire research program." - The Independent Review

"The work is a solid, compelling read for anyone interested in a concise but comprehensive account of the case against libertarian paternalism and its theoretical foundations. In the course of battling libertarian paternalism and its underlying theories, White simultaneously builds a positive case for individual freedom in defence of more traditional, non-paternalistic paradigms of libertarian philosophy and economics." - Erasmus Journal for Philosophy and Economics

This feature require that you enable JavaScript in your browser.
END_OF_DOCUMENT_TOKEN_TO_BE_REPLACED

This feature require that you enable JavaScript in your browser.
END_OF_DOCUMENT_TOKEN_TO_BE_REPLACED