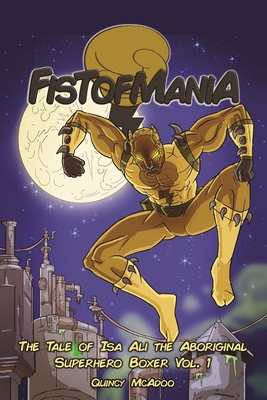 FISTOFMANIA is the thrilling story of Isa Ali, an Indigenous American boxer who is also a very wealthy businessman, philanthropist, and landowner.

Isa's main rival is Inca El, who he has to fight. Before they meet, however, Isa discovers that there is a performance-enhancing drug on the streets in the form of a canned drink. It's called FISTOFMANIA, and Inca plans on using it.

The FISTOFMANIA drink gives extraordinary punching power to those who use it, and Isa needs to find its source. Concealing his identity in a clever disguise, Isa follows a lead he has hoping to track down the person who is selling it before the big fight.

In the meantime, Isa continues training hard. While he prepares for his showdown with Inca, Isa develops a hair testing kit that is designed to detect even the faintest trace of any narcotic used by the person. To keep the fight fair, Isa and Inca will both be tested on the day of their fight. In the end, the better fighter will prevail

My name is Quincy McAdoo from Efland, North Carolina. My two main interests are my family and sports, of which my favorites are basketball and boxing. The FISTOFMANIA concept was inspired by my sons Isa and Ezra McAdoo, and from my love for boxing. I hope you enjoy the tale

This feature require that you enable JavaScript in your browser.
END_OF_DOCUMENT_TOKEN_TO_BE_REPLACED

This feature require that you enable JavaScript in your browser.
END_OF_DOCUMENT_TOKEN_TO_BE_REPLACED