The Best Feeling In The World (Paperback) 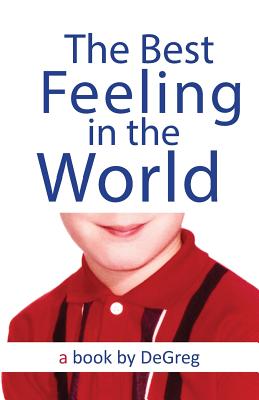 "Full of nostalgia and heart, DeGreg takes us on a very personal journey of coming of age in the tumultuous times of the Sixties and Seventies. Think of a completely honest version of The Wonder Years filled with rock 'n roll, basketball, sex, and lots of easily forgotten truths about growing up."
--Ace Atkins, New York Times Bestselling author of The Redeemers

"Had Holden Caulfield grown up in Rutherford, New Jersey, he might have found the Mountain Way Gang and The Best Feeling in the World. DeGreg's coming-of-age memoir is a reminder of the pitfalls, pratfalls, and endless adventure that's possible right out the front door to an American kid."
-- Mark Strassmann, CBS News

" DeGreg has] a style of writing that is verbally alive--leaping language...makes reading fun."
-- William Davies King, author, Collections of Nothing

From The Best Feeling In The World:

"It's funny how you come around to learn things, like sometimes you get exactly what you wanted, but it turns out to be the last thing you needed."

This is the story of a boy named Dego, written by a man called DeGreg; the story of a classic middle class middle child--a baby, then a boy, trying hard to become a man, and f-ing it up along the way. Growing up across the river from New York City has a certain affect on a Jersey boy; though we have no idea what that might be. The fun of it is, it doesn't matter where you grew up, you'll see yourself in these stories. You'll be running through the neighborhood right alongside the kids of the Mountain Way Gang--playing army, baseball, kick-the-can, or whatever else kids dream up when searching for fun, killing time, or chasing after... The Best Feeling In The World.

And, what a world it turns out to be, a freaky mess of good and evil, and a whole lot of middle ground. A kaleidoscope of life bombarding the senses, tempting us, scaring us, inspiring us forward. Even the best childhood doesn't last forever and none truly prepares any of us for what might happen next. Sometimes, things get a little hairy. Grade school innocence fades and crazy sexy heartbreaking adolescence rises up.

"I looked at the two-family houses next to us, I wondered if the people who lived there, in those exact houses, knew about this, about intercourse. Did everybody know, except me?"

It's a crazy world, crazier still inside the mind of fifteen-year-old having a tough time of it. It's funny how one wrong move can really mess things up, even change a person forever. Chances are Dego's journey is a lot like yours, and altogether different at the same time.

We're all chasing after it, whatever it is. It's not the same for everyone, and it might change over time. No matter what it is, you know it when you feel it, it's... The Best Feeling In The World.

Get the book. Read it now. The teenager in you will appreciate it, even if you end up flipping yourself off in the process.

This feature require that you enable JavaScript in your browser.
END_OF_DOCUMENT_TOKEN_TO_BE_REPLACED

This feature require that you enable JavaScript in your browser.
END_OF_DOCUMENT_TOKEN_TO_BE_REPLACED