The Hollywood Survival Guide for Actors: Your Handbook to Becoming a Working Actor in La (Paperback) 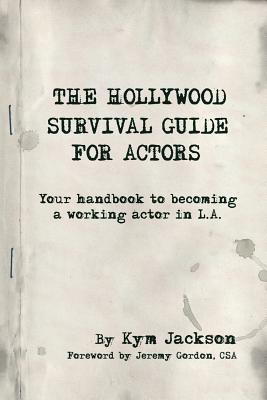 The Hollywood Survival Guide For Actors is a 352 page reference guide written by working actress and MENSA member Kym Jackson (Criminal Minds, Snitch, NCIS: LA). The text reveals all the current information an actor needs to have a successful career in film and television today.

It is a tell-all of the insider secrets author Kym Jackson spent nine years researching and compiling for any actor hoping to navigate the rough seas of the film and TV industry. Proofed and edited by over forty top Hollywood professionals, it covers hundreds of rarely revealed topics like audition protocols, how films are financed, how TV shows are created, how and where to network, SAG-AFTRA contract categories, on-set terminology and behavior, where legitimate auditions are sourced, and literally hundreds more pieces of knowledge vital for anyone seriously pursuing a professional acting career. With a foreword by top Hollywood casting director Jeremy Gordon (Wolverine, We The Millars), the book has been added to textbook lists for performing arts departments at several universities and is recommended reading in many performing arts conservatories.

This feature require that you enable JavaScript in your browser.
END_OF_DOCUMENT_TOKEN_TO_BE_REPLACED

This feature require that you enable JavaScript in your browser.
END_OF_DOCUMENT_TOKEN_TO_BE_REPLACED