Acting in the Million Dollar Minute: The Art and Business of Performing in TV Commercials, Expanded Edition (Limelight) (Paperback) 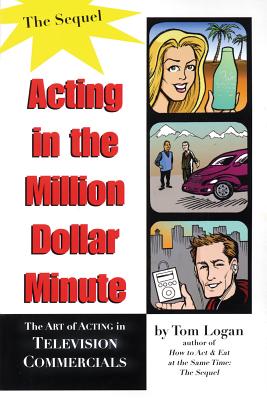 While television commercials often elicit groans from the viewer, they mean work for actors and can be the bread-and-butter backbone of an actor's career, providing a safety net of income while he or she climbs the ladder to greater success. And for those actors who achieve face-to-product recognition, commercial work can provide handsome residuals for years to come. While many books on the market include some information on commercial work, Acting in the Million Dollar Minute deals exclusively with the art and business of acting in commercials. Here the "art" is narrow: script terminology and procedure, commercial dialogue, camera staging, working the product, sample commercial scripts, and detailed analysis of how a commercial is actually shot; while the "business" side, reflecting the general industry, broadens to include training, photos, the resume, unions, actor-agency contracts, the interview, the screen test, callbacks, pay and working conditions, and a complete list of SAG and AFTRA offices. In this revised and updated edition, this book provides direction on how to: Decipher the meaning behind the commercial script; Begin and end every commercial performance; Get the auditioners' attention immediately when the camera begins rolling; Compel the auditioners, with the sheer force of your performance, to actually watch your playback tape; Take the camera from another actor (i.e. upstaging); Give the director a performance that makes his or her job easier in the editing room.

Well-known as an actor's director, Tom Logan has successfully written, produced, and directed for many TV shows and feature films, both for the big screen and television. He has directed hundreds of national and international TV commercials. Tom continue to write, produce, and direct in all of these mediums working on multiple TV shows, featured films, and commercials. He has won multiple awards including various best director and producer awards from prestigious film organizations, as well as for his teaching, workshops, and books. As an actor, Tom had recurring roles on daytime soaps, including General Hospital, Days of Our Lives, the Young and the Restless, and Capitol. He also had co-starring roles on many prime time TV series and featured films, as well as live theatre, including Broadway. Tom was an acting coach whose clients included top stars from television, film, top athletes, rock stars, and many other well-known personalities. He has been interviewed on many national talk shows in the U.S., Canada, and Europe, including Inside Edition, Access Hollywood, CNN, to name but a few. Tom's bestselling books include, How to Act and Eat at the Same Time, The Sequel, and Acting in the Million Dollar Minute, The Sequel. He has endorsements from such stars as Lucille Ball, Charlton Heston, Debbie Reynolds, and dozens of well-known agents, producers, directors. Both are required reading in many universities internationally and have rave reviews including the Los Angeles Times, Backstage, Hollywood Reporter, Variety, and many more. Tom has performed his acting seminars throughout the world for the past 30-plus years. He headed the TV/Film & Commercial acting departments in Los Angeles at two of the most prestigious acting schools worldwide - the American Academy of Dramatic Arts (1981-89), and the American Film Institute (1980-89). Tom has two sons and resides in Newport Beach, California.

This feature require that you enable JavaScript in your browser.
END_OF_DOCUMENT_TOKEN_TO_BE_REPLACED

This feature require that you enable JavaScript in your browser.
END_OF_DOCUMENT_TOKEN_TO_BE_REPLACED