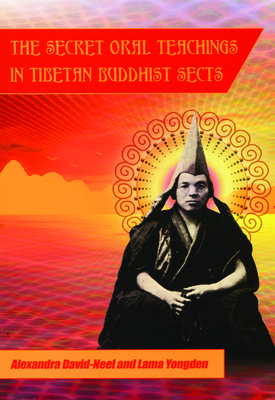 By Alexandra David-Neel, Michael Lally
$15.95
Email or call for price.

A short, accessible, and well-written guide to Buddhism by the remarkable Alexandra David-Neel.

The Secret Oral Teachings in Tibetan Buddhist Sects by Alexandra David-Neel and Lama Yongden, is always on my night stand. I return to it again and again in different stages of my life.--Marina Ambramovic, artist

This is an account of the Madhyamika (Middle Way) school of Buddhism, a method of mediation and enlightenment that was developed by the great Indian teacher Nagarjuna.

In a collaboration between the Frenchwoman Alexandra David-Neel and her friend, the Tibetan lama Aphur Yongden, these teaching are presented clearly and elegantly, intended for the layman who seeks a way to practice and experience the realization of oneness with all existence.

. . . this is the most direct, no-nonsense, and down-to-earth explanation of Mahayana Buddhism that has been written. Specifically, it is a wonderfully lucid account of the Middle Way method of enlightenment worked out by the great Indian sage Nagarjuna.--Alan Watts, The Book

David-Ne l herself is often relegated to the ranks of 'women adventurers' this despite the production of some forty-odd books, several of which have wielded an extraordinary influence.--Harry Oldmeadow, La Trobe University, Bendigo, Australia

Alexandra David-Neel was born in 1868 in Paris. In her youth she wrote an incendiary anarchist treatise and was an acclaimed opera singer; then she decided to devote her life to exploration and the study of world religions, including Buddhist philosophy. She traveled extensively to in Central Asia and the Far East, where she learned a number of Asian languages, including Tibetan. In 1914, she met Lama Yongden, who became her adopted son, teacher and companion. In 1923, at the age of fifty-five, she disguised herself as a pilgrim and journeyed to Tibet, where she was the first European woman to enter Lhasa, which was closed to foreigners at the time. In her late seventies, she settled in the south of France, where she lived until her death at 101 in 1969.

This feature require that you enable JavaScript in your browser.
END_OF_DOCUMENT_TOKEN_TO_BE_REPLACED

This feature require that you enable JavaScript in your browser.
END_OF_DOCUMENT_TOKEN_TO_BE_REPLACED