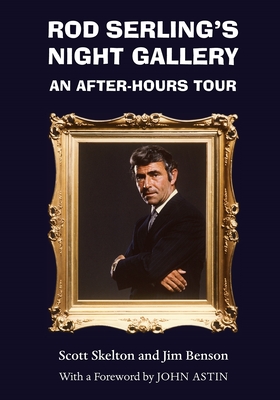 In the early 1970s, Emmy-winning dramatist Rod Serling followed his landmark television series, The Twilight Zone, with Night Gallery. This multisegment foray into the macabre proved to be a new forum for Serling's unique brand of storytelling. In chronicling the turbulent history behind this innovative program, authors Scott Skelton and Jim Benson provide fascinating production detail and behind-the-scenes material, with critical commentary, complete cast and credit listings, and synopses of all ninety-eight episodes.

Containing more than one hundred photographs-some never before published-this book is spiced with anecdotes from such film and television luminaries as Leonard Nimoy, John Astin, Sydney Pollack, Roddy McDowall, Richard Kiley, and Leslie Nielsen. Rod Serling's Night Gallery: An After-Hours Tour offers the first comprehensive overview of a significant entry in the annals of classic television.

Scott Skelton is a freelance journalist based in Eugene, Oregon. Jim Benson has written for the Copley News Radio Network. He owns one of the largest mail-order companies in the country, specializing in TV memorabilia.

This feature require that you enable JavaScript in your browser.
END_OF_DOCUMENT_TOKEN_TO_BE_REPLACED

This feature require that you enable JavaScript in your browser.
END_OF_DOCUMENT_TOKEN_TO_BE_REPLACED