"The Only Unavoidable Subject of Regret": George Washington, Slavery, and the Enslaved Community at Mount Vernon (Hardcover) 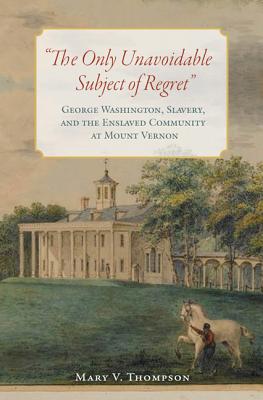 George Washington's life has been scrutinized by historians over the past three centuries, but the day-to-day lives of Mount Vernon's enslaved workers, who left few written records but made up 90 percent of the estate's population, have been largely left out of the story.

In "The Only Unavoidable Subject of Regret," Mary Thompson offers the first comprehensive account of those who served in bondage at Mount Vernon. Drawing on years of research in a wide range of sources, Thompson brings to life the lives of Washington's slaves while illuminating the radical change in his views on slavery and race wrought by the American Revolution.

Thompson begins with an examination of George and Martha Washington as slave owners. Culling from letters to financial ledgers, travel diaries kept by visitors and reminiscences of family members as well as of former slaves and neighbors, Thompson explores various facets of everyday life on the plantation ranging from work to domestic life, housing, foodways, private enterprise, and resistance. Along the way, she considers the relationship between Washington's military career and his style of plantation management and relates the many ways slaves rebelled against their condition. The book closes with Washington's attempts to reconcile being a slave owner with the changes in his thinking on slavery and race, ending in his decision to grant his slaves freedom in his will.

This feature require that you enable JavaScript in your browser.
END_OF_DOCUMENT_TOKEN_TO_BE_REPLACED

This feature require that you enable JavaScript in your browser.
END_OF_DOCUMENT_TOKEN_TO_BE_REPLACED