Modern Medea: A Family Story of Slavery and Child-Murder from the Old South (Paperback) 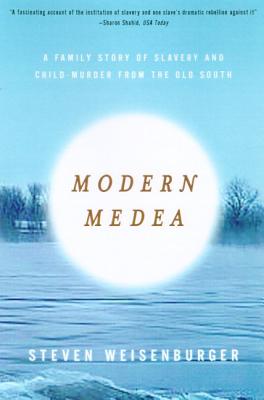 In the middle of a frigid Sunday night in January 1856, a twenty-two-year-old Kentucky slave named Margaret Garner gathered up her family and raced north, toward Cincinnati and freedom. But Margaret's master followed just hours behind and soon had the fugitives surrounded. Thinking all was lost, Margaret seized a butcher knife and nearly decapitated her two-year-old daughter, crying out that she would rather see her children dead than returned to slavery. She was turning on her other three children when slave catchers burst in and subdued her.

Margaret Garner's child-murder electrified the United States, inspiring the longest, most spectacular fugitive-slave trial in history. Abolitionists and slaveholders fought over the meaning of the murder, and the case came to symbolize the ills of the Union in those last dark decades before the Civil War. Newspaper columnists, poets, and dramatists raced to interpret Margaret's deeds, but by the century's end they were all but forgotten. Steven Weisenburger is the first scholar to delve into this astonishing story in more than a century. Weisenburger integrates his innovative archival discoveries into a dramatic narrative that paints a nuanced portrait of the not-so-genteel Southern culture of slavery and its destructive effect on all who lived in and with it.

Steven Weisenburger, professor of English and co-director of the Program in American Culture at the University of Kentucky, is the author of Fables of Subversion: Satire and the American Novel and A "Gravity's Rainbow" Companion.

“Weisenberger has told the full tragedy of the real Margaret Garner, and her life speaks to us more eloquently than any novel about the inhumanity of slavery, the spirit of freedom and the strength of the human will.” —James C. Klotter, Lexington Herald-Leader

“Weisenburger . . . researched newspaper articles, courtroom testimony, maps and manuscripts to piece together the real and fascinating account of the institution of slavery and one slave's dramatic rebellion against it.” —Sharon Shahid, USA Today

"Weisenburger simultaneously acknowledges the inherent bias of history and forces the reader to remember the woman at the center of the story, even though she 'tells' very little of it. . . . His very strength is in acknowledging the partial nature of 'the facts.'" - Kirkus Reviews

This feature require that you enable JavaScript in your browser.
END_OF_DOCUMENT_TOKEN_TO_BE_REPLACED

This feature require that you enable JavaScript in your browser.
END_OF_DOCUMENT_TOKEN_TO_BE_REPLACED