David Walker's Appeal: To the Coloured Citizens of the World, but In Particular, and Very Expressly, to Those of the United States of America (Paperback) 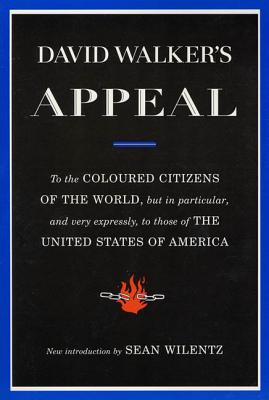 By David Walker, Sean Wilentz (Introduction by)
$16.20
Email or call for price.

David Walker's Appeal is a landmark work of American history and letters, the most radical piece of writing by an African American in the nineteenth century. Startling in its intensity, unrelenting in its attacks on slavery and white racism, it alarmed Southern slaveholders, inspired Northern abolitionists, and hastened the sectional conflicts that led to the Civil War. In this new edition of the Appeal, the distinguished historian Sean Wilentz draws on a generation of innovative research to throw fresh light on Walker's life and ideas--and their enduring importance.

David Walker was born in or near Wilmington, North Carolina, the son of a slave father and a free black mother (thus, under the laws of slavery, he was born free). the year of his birth is uncertain, although the most convincing recent research contends that it was 1796 or 1797. By his own account in the Appeal, Walker left Wilmington as a young man and wandered around the United States, residing for an unspecified period in Charleston, South Carolina. In 1825, he turned up as a used-clothes dealer in Boston, where he would spend the rest of his abbreviated life. He died suddenly in 1830.

Sean Wilentz, a professor of history at Princeton University, is the author or editor of several books, including Chants Democratic and The Rise of American Democracy. He has also written for The New York Times, the Los Angeles Times, The New Republic, and other publications. He lives in Princeton, New Jersey.

“More than a century and a half later, David Walker's Appeal is still a startling document . . . a powerful reminder that slaves and so-called 'free persons of color' were important participants in the great struggle over slavery that led to the Civil War.” —From the Introduction

This feature require that you enable JavaScript in your browser.
END_OF_DOCUMENT_TOKEN_TO_BE_REPLACED

This feature require that you enable JavaScript in your browser.
END_OF_DOCUMENT_TOKEN_TO_BE_REPLACED