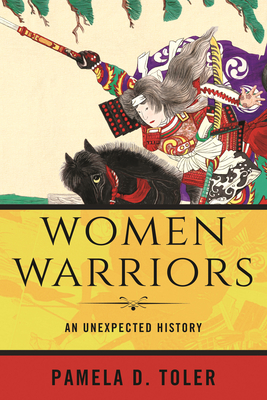 Who says women don’t go to war? From Vikings and African queens to cross-dressing military doctors and WWII Russian fighter pilots, these are the stories of women for whom battle was not a metaphor.

The woman warrior is always cast as an anomaly—Joan of Arc, not GI Jane. But women, it turns out, have always gone to war. In this fascinating and lively world history, Pamela Toler not only introduces us to women who took up arms, she also shows why they did it and what happened when they stepped out of their traditional female roles to take on other identities.

* Tomyris, ruler of the Massagetae, who killed Cyrus the Great of Persia when he sought to invade her lands
* The West African ruler Amina of Hausa, who led her warriors in a campaign of territorial expansion for more than 30 years
* Boudica, who led the Celtic tribes of Britain into a massive rebellion against the Roman Empire to avenge the rapes of her daughters
* The Trung sisters, Trung Trac and Trung Nhi, who led an untrained army of 80,000 troops to drive the Chinese empire out of Vietnam
* The Joshigun, a group of 30 combat-trained Japanese women who fought against the forces of the Meiji emperor in the late 19th century
* Lakshmi Bai, Rani of Jhansi, who was regarded as the “bravest and best” military leader in the 1857 Indian Mutiny against British rule
* Maria Bochkareva, who commanded Russia’s first all-female battalion—the First Women’s Battalion of Death—during WWII
* Buffalo Calf Road Woman, the Cheyenne warrior who knocked General Custer off his horse at the Battle of Little Bighorn
* Juana Azurduy de Padilla, a mestiza warrior who fought in at least 16 major battles against colonizers of Latin America and who is a national hero in Bolivia and Argentina today
* And many more spanning from ancient times through the 20th century.

By considering the ways in which their presence has been erased from history, Toler reveals that women have always fought—not in spite of being women but because they are women.

Pamela D. Toler goes beyond the familiar boundaries of American history to tell stories from other parts of the world, as well as history from the other side of the battlefield, the gender line, or the color bar. She is author of The Heroines of Mercy Street: The Real Nurses of the Civil War, among other books. Her work has appeared in Aramco World, Calliope, History Channel Magazine, MHQ: The Quarterly Journal of Military History, and on Time.com.

“Toler seeks out courageous women of history who ‘have been pushed into the shadows, hidden in the footnotes, or half-erased . . . . A short book admirable for wide research.’”
—Kirkus Reviews

“This entertaining and informative history of women warriors briskly covers huge swathes of time and place, arguing for the significance of a phenomenon as old as warfare itself.”
—Julia Kastner (librarian), Shelf Awareness

“Lucid and lively, Pamela Toler’s delightfully complex history of women’s presence on the battlefield debunks the myth that women have not been and therefore cannot be warriors. It is a welcome contribution to the growing body of work that seeks to bring women out of the shadows of history, in this case the particularly male world of military history.”
—Anne Boyd Rioux, author of Meg, Jo, Beth, Amy: The Story of Little Women and Why It Still Matters

“Pamela Toler’s exhilarating accounts of so many women who went to war, around the world, from antiquity to the present, and for so many different reasons, finally puts to rest the tired old arguments that only men are fit for combat.”
—Adrienne Mayor, author of The Amazons: Lives and Legends of Warrior Women Across the Ancient World

“Pamela Toler’s writing never fails to delight me. In Women Warriors, she is like that best friend who is just way smarter than you, whose witty and engaging explanations help you see the past in a brand-new light. Toler takes you on a whirlwind tour through history and around the world, sharing stories about the hidden history of women who have led in military battle, elucidating the reasons why women’s long history in combat has often been hidden. Toler is a first-rate scholar who truly knows her stuff, and yet she imparts her wisdom with a light and engaging touch.”
—Elizabeth Letts, author of the New York Times bestseller The Perfect Horse

“In Women Warriors: An Unexpected History, self-described ‘academic renegade’ Pamela D. Toler has crafted a smart and highly entertaining chronicle of female fighters. Working across centuries and continents, Toler introduces readers to a host of colorful, courageous women who proved themselves as formidable foes on the battlefield, outwitting and overpowering their male adversaries along the way. From Boudica, who led a rebellion against the Roman Empire, to Maria Bochkareva, who commanded Russia’s first all-female battalion during World War II, we meet countless forgotten sister soldiers who acted with valor and verve. Toler may call this history unexpected, but readers will consider it a necessary and most welcome addition to the current literature about women and war.”
—Paige Bowers, author of The General’s Niece: The Little-Known de Gaulle Who Fought to Free Occupied France

This feature require that you enable JavaScript in your browser.
END_OF_DOCUMENT_TOKEN_TO_BE_REPLACED

This feature require that you enable JavaScript in your browser.
END_OF_DOCUMENT_TOKEN_TO_BE_REPLACED