Elvis: The Story of the Rock and Roll King (Hardcover) 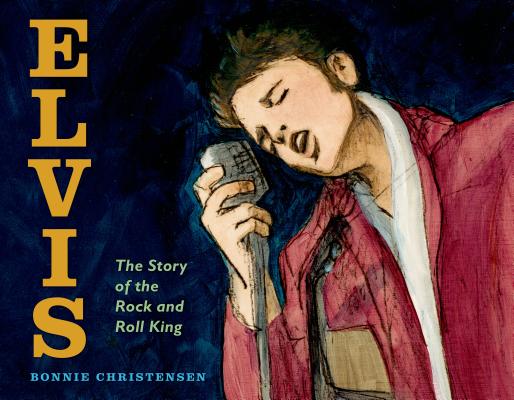 An only child, a mama's boy—Elvis was a shy kid who struggled to make friends and found comfort singing in church and learning guitar. While in high school, he continued his music but was often ridiculed by students. On a whim, he recorded a song for his mom's birthday at Sun Record Studios as part of a customer promotion. The studio loved it so much that they sent it to local record stations . . . and the rest is history.

Here is the story of how a poor kid from Tupelo, Mississippi, became an American legend.

“* Evocative photo-and-oil-paint collages and a narrative that reads like a series of bluesy prose poems distinguish the late Christensen's atmospheric study of the early life of Elvis Presley.” —Publishers Weekly, Starred Review

“* An excellent addition to biography collections, and a superb way to introduce the history of rock to a new generation.” —Mahnaz Dar, School Library Journal

“* The early life of Elvis Presley is presented here in lyrical, yet sometimes sharp-edged prose that brings the singer close.” —Booklist, STARRED REVIEW

“Christensen's photo-collage and mixed-media illustrations have just the right touch of folksiness for the subject. . .Christensen wisely focuses on Elvis's childhood and pre-fame years, before the comeback specials and gold-trimmed leisure suits; many young readers will relate to Elvis's unwavering focus on music” —Sam Bloom, The Horn Book

“In the intimate, affectionate voice of a neighbor or acquaintance who might have "known him when," Christensen traces the early years of Elvis Presley . . .viewers get their first true glimpse of the rising star.” —The Bulletin

“* In addition to being a useful resource for biography reports, the story of Warhol's artistic triumphs despite his social difficulties will prove inspirational for young readers who feel as if they don't quite fit in.” —School Library Journal, starred review on Fabulous

“A vital and exciting child-appropriate introduction to an American icon.” —Kirkus Reviews on Fabulous

“* Evocative photo-and-oil-paint collages and a narrative that reads like a series of bluesy prose poems distinguish the late Christensen's atmospheric study of the early life of Elvis Presley.” —Publishers Weekly on Fabulous

“* Christensen completes the tale of the guitarist's success with an author's note, a brief paragraph on the Roma people, and a bibliography/discography. She includes enough detail to give perspective, but it is her lush paintings that so effectively give life to the man's effervescent charm and determined courage.” —School Library Journal, starred review on Django

“* Christensen supports the inspirational story with rich, vibrant paintings that capture the texture and tone of the landscapes in Django's life: burnt oranges and various shades of brown bring the Gypsy campfires to vivid life, while bright blues shimmering under the sharp yellows of stage footlights depict the electricity of the guitarist in performance.” —Booklist, starred review on Django

This feature require that you enable JavaScript in your browser.
END_OF_DOCUMENT_TOKEN_TO_BE_REPLACED

This feature require that you enable JavaScript in your browser.
END_OF_DOCUMENT_TOKEN_TO_BE_REPLACED