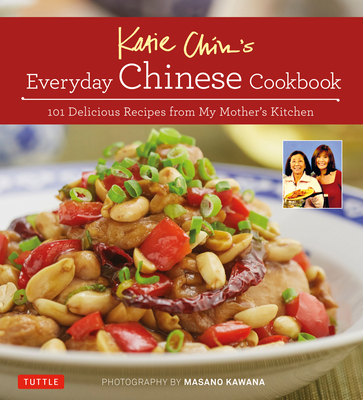 Katie Chin has done us all a huge favor: she's provided us with recipes for so many of the Chinese dishes we always wanted to cook but have never had clear and easy instructions to prepare...Thank you Katie Chin --Martha Stewart Home chefs will enjoy preparing these Chinese home cooking-inspired dishes with this easy-to-follow Chinese cookbook. Author Katie Chin's love of cooking blossomed at an early age--watching and later helping her renowned mother, Leeann Chin, prepare delicious Chinese dishes in her popular restaurants. Born in China, Leeann was an award-winning restaurateur and author revered for her ability to demystify Chinese cooking for the American home cook. Katie inherited her mom's passion and talent and has become a respected food writer and television personality in her own right. Sadly, Leeann passed away in 2010, but her recipes live on. Katie is eager to share her mother's food legacy with you in this book--an homage to Leeann's mastery of all that Chinese cooking has to offer. This treasury of family recipes includes many unique dishes that Leeann developed during a six-decade career in the food business, including time-honored classics that she learned from her mother in China. Some dishes reflect Leeann's Chinese-American childhood or are recipes which Katie and Leeann developed while together. Others are creations that Katie has invented more recently. Woven throughout the book are fond memories and anecdotes from Katie's childhood, always involving cooking and eating with her mom. Katie Chin's Everyday Chinese Cooking is a celebration of Leeann Chin's fantastic mastery of the complete array of flavors and techniques in Chinese cuisine, and her unique ability to make them accessible to Westerners. Katie provides tips and techniques which allow anyone to create a refined and tasty Chinese meal at home. Favorite Chinese recipes include:
Let yourself be inspired by the exquisite flavors of Leeann and Katie Chin's signature Chinese cuisine.

Katie Chin was born and raised in Minneapolis by her award-winning restaurateur mother, Leeann Chin. She is the co-author of Everyday Chinese Cooking (Clarkson Potter, 2000) and author of 300 Best Rice Cooker Recipes and Everyday Thai Cooking. She was the co-host with her mother, Leeann, of the 2003 national PBS cooking series Double Happiness. Katie has made numerous appearances on The Today Show and has appeared in specials on The Food Network and Fine Living. She has been featured in Glamour, Family Circle, Cooking Light, Bon Appetit, Self Magazine, Angeleno Magazine, Hampton Magazine, Elle Magazine, Daily Candy, Daily Variety, Real Simple and The Los Angeles Times. Katie has served as a guest judge on Food Network's Iron Chef America and appeared on Cooking Channel's Food(ography) program in 2013. When not testing out her new recipes on family and friends, she divides her time as a private chef and culinary consultant. Katie has been called the Asian Rachel Ray by many of her fans because of her sparkling personality and approachable style. Foreword-Writer, Raghavan Iyer, is an IACP Award-winning Teacher of the Year, and author of 660 Curries, Betty Crocker's Indian Home Cooking, and the James Beard Award Finalist The Turmeric Trail: Recipes and Memories from an Indian Childhood. He is also a spokesperson and consultant to General Mills, Target, and other companies.

This feature require that you enable JavaScript in your browser.
END_OF_DOCUMENT_TOKEN_TO_BE_REPLACED

This feature require that you enable JavaScript in your browser.
END_OF_DOCUMENT_TOKEN_TO_BE_REPLACED