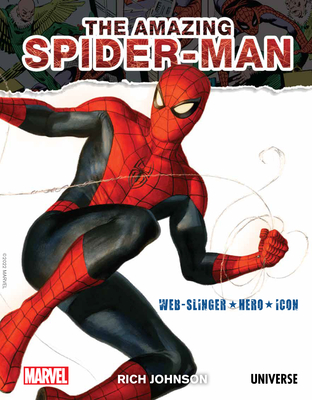 On the eve of Spider-Man’s 60th anniversary, a dynamic curation of Spider-Man’s seminal comic book stories, including all things Spidey: his character’s origin, various significant storylines over the decades, and his popularity as a cultural icon.

Spider-Man explores the phenomenon of one of Marvel Comics’s most popular and relatable nerdy science-kid-turned-superhero with the 30 most significant and influential Spidey stories and including relevant spinoffs and ancillary comic book events. Framed by longtime comic book industry insider Rich Johnson, the story is told using count-less comic book images, film stills, and storyboards: how Peter Parker became Spider-Man; costume and character story changes over the decades; the influence of Spidey on all other comic book characters; classic Spidey nemeses like Doc Ock, Green Goblin, and Venom; contemporary popular spinoff stories like the Avengers crossovers Miles Morales, Spider-Gwen, and the Spider-Verse; and how Spider-Man comics have been so influential on and relevant in today’s comic book (and superhero film) culture. The book contains more than 200 illustrations, including covers, interior comic art, and sketch treatments, beginning with his inception in the early 1960s to present-day treatments of the character. Spider-Man will appeal to new fans looking for a great starting place for learning about your Friendly Neighborhood Spider-Man, to megafans, and to Marvel collectors alike.

Rich Johnson is a longtime comic book industry main-stay. Johnson spent time as a VP with DC Comics, a VP of Lion Forge Press, and has been an Eisner Awards judge. He writes for comics website The Beat, and founded and was co-Publishing Director of manga imprint Yen Press. Johnson is also an adjunct professor at Drexel and Pace Universities.

This feature require that you enable JavaScript in your browser.
END_OF_DOCUMENT_TOKEN_TO_BE_REPLACED

This feature require that you enable JavaScript in your browser.
END_OF_DOCUMENT_TOKEN_TO_BE_REPLACED