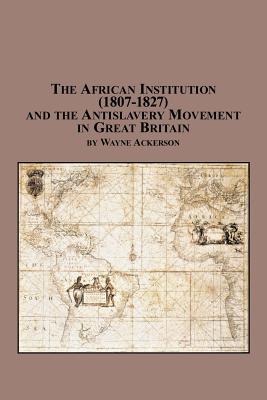 The African Institution was a pivotal abolitionist and antislavery group in Britain during the early nineteenth century, and its members included royalty, prominent lawyers, Members of Parliament, and noted reformers such as William Wilberforce, Thomas Clarkson, and Zachary Macaulay. Focusing on the spread of Western civilization to Africa, the abolition of the foreign slave trade, and improving the lives of slaves in British colonies, the group's influence extended far into Britain's diplomatic relations in addition to the government's domestic affairs. The African Institution carried the torch for antislavery reform for twenty years and paved the way for later humanitarian efforts in Great Britain. This book is the only monograph on the African Institution, and thus the only specific book length analysis of its successes and failures. The 20-year period of its existence was a crucial transitional period for the antislavery movement, and the book adds to a relatively sparse body of research on that particular time period.

This feature require that you enable JavaScript in your browser.
END_OF_DOCUMENT_TOKEN_TO_BE_REPLACED

This feature require that you enable JavaScript in your browser.
END_OF_DOCUMENT_TOKEN_TO_BE_REPLACED