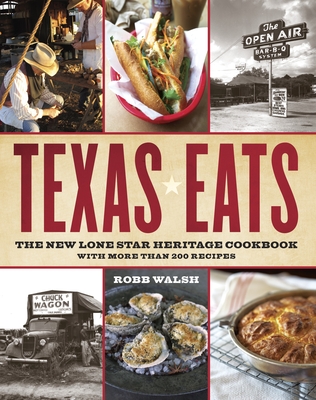 Who says cooking is for homebodies? Veteran Texas food writer Robb Walsh served as a judge at a chuck wagon cook-off, worked as a deckhand on a shrimp boat, and went mayhaw-picking in the Big Thicket. As he drove the length and breadth of the state, Walsh sought out the best in barbecue, burgers, kolaches, and tacos; scoured museums, libraries, and public archives; and unearthed vintage photos, culinary stories, and nearly-forgotten dishes. Then he headed home to Houston to test the recipes he’d collected back in his own kitchen. The result is Texas Eats: The New Lone Star Heritage Cookbook, a colorful and deeply personal blend of history, anecdotes, and recipes from all over the Lone Star State.

In Texas Eats, Walsh covers the standards, from chicken-fried steak to cheese enchiladas to barbecued brisket. He also makes stops in East Texas, for some good old-fashioned soul food; the Hill Country, for German- and Czech-influenced favorites; the Panhandle, for traditional cowboy cooking; and the Gulf Coast, for timeless seafood dishes and lost classics like pickled shrimp. Texas Eats even covers recent trends, like Viet-Texan fusion and Pakistani fajitas. And yes, there are recipes for those beloved-but-obscure gems: King Ranch casserole, parisa, and barbecued crabs. With more than 200 recipes and stunning food photography, Texas Eats brings the richness of Texas food history vibrantly to life and serves up a hearty helping of real Texas flavor.

A three-time James Beard award winner, ROBB WALSH is the author of five previous Texas cookbooks. A former restaurant reviewer for the Houston Press and the Austin Chronicle, Walsh currently co-owns a Tex-Mex restaurant in Houston with chef Bryan Caswell. Walsh is a cofounder and board member of Foodways Texas.

The mission of Foodways Texas is to preserve, promote, and celebrate the diverse food cultures of Texas. For more information, visit www.foodwaystexas.com.

Texas Eats isn’t just a cookbook. Or a history book. It’s really the world of Texas food according to Walsh.
—Dallas Morning News

“This book is rich with gravitas and gravy. But its true strength is the broad cast of previously unheralded characters—from Vietnamese pho masters in Houston to chicken-fried steak pioneers in Paradise—whose family histories and recipes tell us what it means to claim a Texas kitchen as your own.”
—John T Edge, series editor, Cornbread Nation: The Best of Southern Food Writing

“With a brilliant eye for detail, master storyteller Robb Walsh delivers a remarkable portrait of Lone Star food. Recipe by recipe, he shows that Texas is its own country, with its own reasons and contradictions and, thankfully, one of the purest and most unique cuisines in the continental United States.”
—Molly O’Neill, author of One Big Table: A Portrait of American Cooking

“Robb Walsh is the Homer of Brisket, the great storyteller of Texas food. Spending half a day with him, eating breakfast tacos, chicken-fried steak, and Galveston oysters, is getting a history lesson, adventure tale, and potential heart stoppage all at once. Luckily, with this book, you can pace yourself.”
—Francis Lam, Features Editor, Gilt Taste

“Robb Walsh’s new book has ‘Eat Me!’ written all over it.”
—Kinky Friedman

This feature require that you enable JavaScript in your browser.
END_OF_DOCUMENT_TOKEN_TO_BE_REPLACED

This feature require that you enable JavaScript in your browser.
END_OF_DOCUMENT_TOKEN_TO_BE_REPLACED