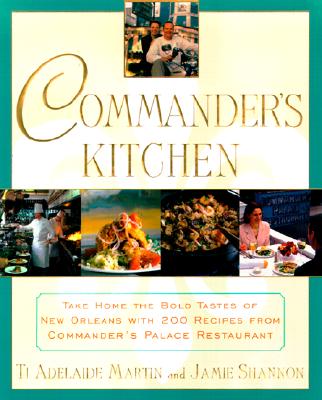 Commander's Palace is one of the most critically acclaimed and beloved restaurants in the country. It was named the outstanding restaurant in America by the James Beard Foundation, and is always rated the most popular restaurant in New Orleans by Zagat. It consistently receives awards from magazines such as Food & Wine, Wine Spectator, and Southern Living. A trip to New Orleans just isn't complete without a meal at Commander's Palace.

"A delicious combination of Commander's classics and Chef Jamie's flavor
and flair! What a restaurant! What a family!"
--Chef Emeril Lagasse

"For the very same reasons that Commander's Palace is a great, classic restaurant, Commander's Kitchen is a winner of a cookbook. It's generous in sharing recipes that are enormously appealing and user-friendly with a healthy seasoning of spunk and soul."
--Danny Meyer, coauthor of The Union Square Cafe Cookbook

"Step through the doors of Commander's Kitchen and celebrate the magical hospitality and vibrant cooking of New Orleans. The book's intoxicating imagery and seductive recipes will have you licking your lips in anticipation of Commander's tantalizing tastes. Chef Jamie Shannon is a fish expert extraordinaire, and his well-seasoned tips will lure you into the kitchen to create your own show-stopping memories."
--Leslie Beal Bloom, coauthor of Seafood Cooking for Dummies

"The Commander's Palace tradition of excellence, savored by so many generations during the last century, has been elegantly and clearly written for the new century in a book that defines, explains, and demonstrates New Orleans cooking at its best--Commander's Kitchen is for old-timers and newcomers alike, a feast for everybody."
-Peter Feibleman, author of American Cooking: Creole and Acadian

"One of my all-time favorite gastronomic destinations in the United States is New Orleans and Commander's Palace is, of course, at the top of my list of places to dine. Bravo Ti and Jamie for translating the culinary tradition of the legendary Brennan family into a book that the home cook can both enjoy reading and cooking from."
--Daniel Boulud, chef/owner of Restaurant Daniel and Cafe Boulud

This feature require that you enable JavaScript in your browser.
END_OF_DOCUMENT_TOKEN_TO_BE_REPLACED

This feature require that you enable JavaScript in your browser.
END_OF_DOCUMENT_TOKEN_TO_BE_REPLACED