Every Day's a Party: Louisiana Recipes For Celebrating With Family And Friends (Hardcover) 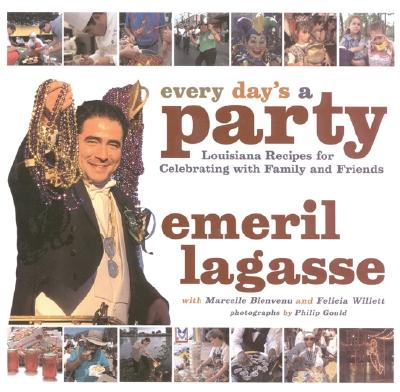 By Emeril Lagasse
Email or call for price
Hard to Find

Emeril takes you through a year's worth of party and festival menus (divided by month) from Super Bowl tailgate to Mardi Gras, from the New Year's Eve to end the millennium to the New Orleans Jazz Fest. In the fun and colorful style that Emeril brings to his Food Network television show Emeril Live and to all his cookbooks, Every Day's a Party is filled with over 125 recipes and Emeril's signature "kick-it-up-a-notch" way of making every occasion an over-the-top celebration.

You've never had this much fun on President's Day.

Emeril Lagasse is a chef, restaurateur, and the author of eighteen bestselling cookbooks, including the recent Emeril's Kicked-Up Sandwiches and Sizzling Skillets and Other One Pot Wonders. He is the proprietor of thirteen award-winning restaurants across the country and is the host of The Originals with Emeril and Emeril's Florida, both airing on the Cooking Channel. He has been the food correspondent for ABC's Good Morning America for fourteen years. In 2002, Emeril established the Emeril Lagasse Foundation to support children's educational programs that inspire and mentor young people through the culinary arts and promote nutrition and healthy eating.

This feature require that you enable JavaScript in your browser.
END_OF_DOCUMENT_TOKEN_TO_BE_REPLACED

This feature require that you enable JavaScript in your browser.
END_OF_DOCUMENT_TOKEN_TO_BE_REPLACED