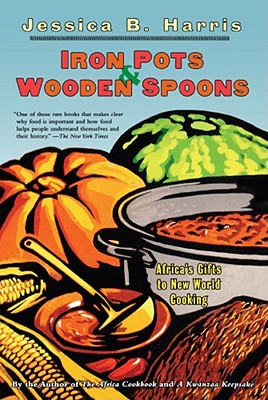 Cajun, Creole, and Caribbean dishes all have their roots in the cooking of West and Central Africa; the peanuts, sweet potatoes, rice, cassava, plantains, and chile pepper that star in the cuisines of New Orleans, Puerto Rico, and Brazil are as important in the Old World as they are in the New World. In Iron Pots and Wooden Spoons, esteemed culinary historian and cookbook author Jessica Harris returns to the source to trace the ways in which African food has migrated to the New World and transformed the way we eat. From condiments to desserts, Harris shares more than 175 recipes that find their roots and ingredients in Africa, from Sand-roasted Peanuts to Curried Coconut Soup, from Pepper Rum to Candied Sweet Potatoes, from Beaten Biscuits to Jamaica Chicken Run Down, from Shortening Bread to Ti-Punch.
Enticing recipes, a colorful introduction on the evolution of transported African food, information on ingredients from achiote to z'oiseaux and utensils make this culinary journey a tantalizing, and satisfying, experience.

Jessica B. Harris holds a PhD from NYU, teaches English at Queens College, and lectures internationally. The author of the memoir My Soul Looks Back as well as twelve cookbooks, her articles have appeared in Vogue, Food & Wine, Essence, and The New Yorker, among other publications; she has made numerous television and radio appearances and has been profiled in The New York Times. Considered one of the preeminent scholars of the food of the African Diaspora, Harris has been inducted into the James Beard Who’s Who in Food and Beverage in America, received an honorary doctorate from Johnson & Wales University and recently helped the Smithsonian Museum of African American History and Culture to conceptualize its cafeteria.

The New York Times One of those rare books that makes clear why food is important and how food helps people understand themselves and their history.

This feature require that you enable JavaScript in your browser.
END_OF_DOCUMENT_TOKEN_TO_BE_REPLACED

This feature require that you enable JavaScript in your browser.
END_OF_DOCUMENT_TOKEN_TO_BE_REPLACED