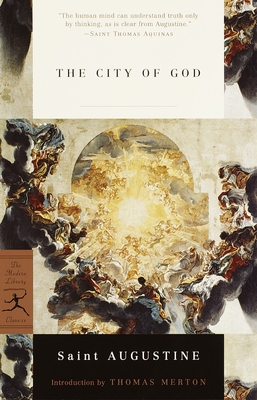 One of the great cornerstones in the history of Christian philosophy, The City of God provides an insightful interpretation of the development of modern Western society and the origin of most Western thought. Contrasting earthly and heavenly cities--representing the omnipresent struggle between good and evil--Augustine explores human history in its relation to all eternity. In Thomas Merton's words, "The City of God is the autobiography of the Church written by the most Catholic of her great saints."

This Modern Library Paperback Classics edition is a complete and unabridged version of the Marcus Dods translation.

Saint Augustine was one of those towering figures who so dominated his age that the age itself bears his name. The Age of Augustine was a time of transition, and Augustine was a genius of such stature that, according to Christopher Dawson, "he was, to a far greater degree than any emperor or general or barbarian warlord, a maker of history and a builder of the bridge which was to lead him from the old world to the new."  He was the ablest religious thinker and controversialist at a period when theological controversy reached a level of intellectual refinement never achieved before or since. He was a tireless preacher and he wrote 118 treatises, including the most famous spiritual autobiography of all time, The Confessions. Of all these works, the one most prized by Augustine was his City of God, a veritable encyclopedia of information on the lives, thoughts and aspirations of ancient and early Christian man.

Marcus Dods (1834–1909) was the Principal of New College in Edinburgh University. He translated Augustine's writings between 1872 and 1876.

The Trappist monk Thomas Merton (1915–1968) remains one of the great spiritual figures of our time. He expressed his inner contemplations through his extensive written works, including poetry, letters and journals. His writings commonly deal with issues of social justice and spirituality.

"The human mind can understand truth only by thinking, as is clear from Augustine."
--Saint Thomas Aquinas

This feature require that you enable JavaScript in your browser.
END_OF_DOCUMENT_TOKEN_TO_BE_REPLACED

This feature require that you enable JavaScript in your browser.
END_OF_DOCUMENT_TOKEN_TO_BE_REPLACED