Class: A Guide Through the American Status System (Paperback) 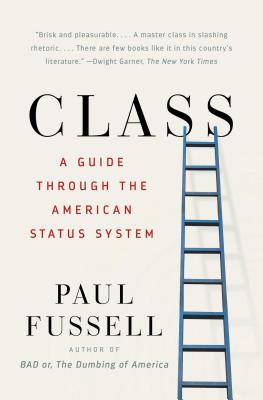 The bestselling, comprehensive, and carefully researched guide to the ins-and-outs of the American class system with a detailed look at the defining factors of each group, from customs to fashion to housing.

Based on careful research and told with grace and wit, Paul Fessell shows how everything people within American society do, say, and own reflects their social status. Detailing the lifestyles of each class, from the way they dress and where they live to their education and hobbies, Class is sure to entertain, enlighten, and occasionally enrage readers as they identify their own place in society and see how the other half lives.

Paul Fussell, critic, essayist, and cultural commentator, has recently won the H. L. Mencken Award of the Free Press Association. Among his books are The Great War and Modem Memory, which in 1976 won both the National Book Critics Circle Award and the National Book Award; Abroad: British Literary Traveling Between the Wars; Wartime: Understanding and Behavior in the Second World War; and, most recently, BAD or, The Dumbing of America. His essays have been collected in The Boy Scout Handbook and Other Observations and Thank God for the Atom Bomb and Other Essays. He lives in Philadelphia, where he teaches English at the University of Pennsylvania.

Wilfrid Sheed The Atlantic A fine prickly pear of a book....Anyone who reads it will automatically move up a class.

This feature require that you enable JavaScript in your browser.
END_OF_DOCUMENT_TOKEN_TO_BE_REPLACED

This feature require that you enable JavaScript in your browser.
END_OF_DOCUMENT_TOKEN_TO_BE_REPLACED