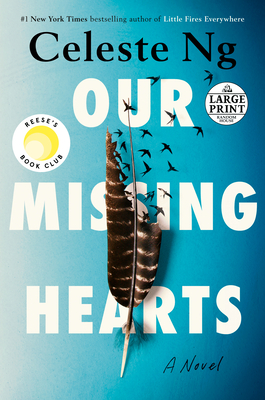 “Set in an uncomfortably plausible dystopian near-future, Our Missing Hearts pulls no punches. Ng wrestles with how to find hope for ourselves and our children against forces that bend toward authoritarianism and nationalism.”
— Allyson Howard, Invitation Bookshop, Gig Harbor, WA

From the #1 bestselling author of Little Fires Everywhere, comes the inspiring new novel about a mother’s unbreakable love in a world consumed by fear.

“Riveting, tender, and timely.” —People, Book of the Week

“Thought-provoking, heart-wrenching . . . I was so invested in the future of this mother and son, and I can’t wait to hear what you think of this deeply suspenseful story!” —Reese Witherspoon (Reese’s Book Club October ’22 Pick)

Twelve-year-old Bird Gardner lives a quiet existence with his loving father, a former linguist who now shelves books in a university library. His mother Margaret, a Chinese American poet, left without a trace when he was nine years old. He doesn’t know what happened to her—only that her books have been banned—and he resents that she cared more about her work than about him.

Then one day, Bird receives a mysterious letter containing only a cryptic drawing, and soon he is pulled into a quest to find her. His journey will take him back to the many folktales she poured into his head as a child, through the ranks of an underground network of heroic librarians, and finally to New York City, where he will finally learn the truth about what happened to his mother, and what the future holds for them both.

Our Missing Hearts is an old story made new, of the ways supposedly civilized communities can ignore the most searing injustice. It’s about the lessons and legacies we pass on to our children, and the power of art to create change.

Celeste Ng is the number one New York Times bestselling author of the novels Everything I Never Told You, Little Fires Everywhere, and Our Missing Hearts. Ng is the recipient of fellowships from the National Endowment for the Arts and the Guggenheim Foundation, and her work has been published in over thirty languages.

This feature require that you enable JavaScript in your browser.
END_OF_DOCUMENT_TOKEN_TO_BE_REPLACED

This feature require that you enable JavaScript in your browser.
END_OF_DOCUMENT_TOKEN_TO_BE_REPLACED