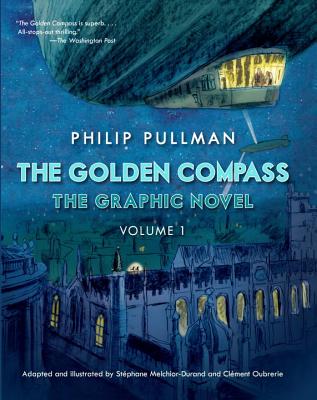 By Philip Pullman
Email or call for price
Hard to Find

The world of Philip Pullman’s internationally bestselling His Dark Materials saga is brought to visual life in book 1 of a three-volume graphic adaptation of The Golden Compass.

Lyra Belacqua is content to run wild among the scholars of Jordan College, with her dæmon familiar always by her side. But the arrival of her fearsome uncle, Lord Asriel, draws her to the heart of a terrible struggle—a struggle born of Gobblers and stolen children, and a mysterious substance known as Dust. As she hurtles toward danger in the cold far North, Lyra never suspects the shocking truth: she alone is destined to win—or to lose—this more-than-mortal battle.

The stunning full-color art offers both new and returning readers a chance to experience the story of Lyra, an ordinary girl with an extraordinary role to play in the fates of multiple worlds, in an entirely new way.

"The story’s signature fantasies—the daemons; the armored mercenary polar bears; and the alethiometer—are realized with compelling force (and, in the case of the daemons, humor). [This] retelling will bring Pullman’s work new fans and give previous readers new pleasure." -- Publishers Weekly, Starred review

"The small and detailed but very clear panels are full of expressive faces, discernible action, and moody shadowing. Readers familiar with Pullman’s novel will appreciate this artistic adaptation, as will readers who simply prefer graphic novels to prose."--Booklist

"Whether this is a reader's first experience with the tale or they are already familiar with the story, they should be delighted by this rendition."--School Library Journal

This feature require that you enable JavaScript in your browser.
END_OF_DOCUMENT_TOKEN_TO_BE_REPLACED

This feature require that you enable JavaScript in your browser.
END_OF_DOCUMENT_TOKEN_TO_BE_REPLACED