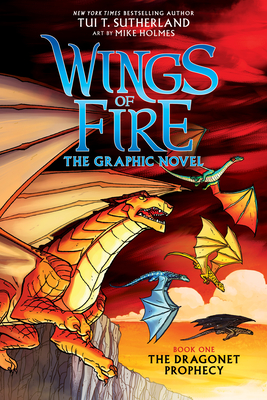 This is book number 1 in the Wings of Fire Graphic Novel series.

Not every dragonet wants a destiny . . .
Clay has grown up under the mountain, chosen along with four other dragonets to fulfill a mysterious prophecy and end the war between the dragon tribes of Pyrrhia. He's not so sure about the prophecy part, but Clay can't imagine not living with the other dragonets; they're his best friends.
So when one of the dragonets is threatened, all five spring into action. Together, they will choose freedom over fate, leave the mountain, and fulfill their destiny -- on their own terms.
The New York Times bestselling Wings of Fire series takes flight in this first graphic novel edition, adapted by the author with art by Mike Holmes.

Tui T. Sutherland is the author of the New York Times and USA Today bestselling Wings of Fire series, the Menagerie trilogy, and the Pet Trouble series, as well as a contributing author to the bestselling Spirit Animals and Seekers series (as part of the Erin Hunter team). In 2009, she was a two-day champion on Jeopardy! She lives in Massachusetts with her wonderful husband, two adorable sons, and two very patient dogs. To learn more about Tui's books, visit her online at tuibooks.com.
Mike Holmes has drawn for the comics series Bravest Warriors and Adventure Time and is the creator of the art project Mikenesses. His books include titles in the Secret Coders (written by Gene Luen Yang) and Animal Crackers series, as well as the True Story collection. He lives in Philadelphia with his wife Meredith, Heidi the dog, and Ella the cat.

Praise for The Dragonet Prophecy (Wings of Fire, Book 1):
"Dramatic battle scenes, double-crosses, and one seriously deranged queen makes WINGS OF FIRE a series that should have broad appeal for middle-grade fantasy fans." -- Booklist
"Fast-paced and detailed, this first installment in a new adventure series is entertaining." -- Kirkus Reviews
"Readers of all ages will be enchanted by the humanistic storyline and the page-turning excitement." -- Library Media Connection
"A thrilling new series for dragon-lovers." -- Austin Family

This feature require that you enable JavaScript in your browser.
END_OF_DOCUMENT_TOKEN_TO_BE_REPLACED

This feature require that you enable JavaScript in your browser.
END_OF_DOCUMENT_TOKEN_TO_BE_REPLACED