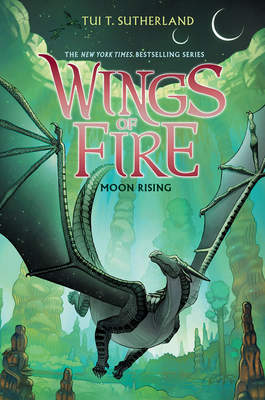 This is book number 6 in the Wings of Fire series.

The New York Times-bestselling series soars to even greater heights with a new prophecy and five new dragonets ready to claim their destiny!

The war between the tribes is finally over, and now the dragonets of the prophecy have a plan for lasting peace: Jade Mountain Academy, a school that will gather dragonets from all the tribes and teach them to live together, perhaps even as friends.

Moonwatcher isn’t sure how she feels about school, however. Hidden in the rainforest for most of her life, the young NightWing has an awful secret. She can read minds, and even see the future. Living in a cave with dozens of other dragons is noisy, exhausting--and dangerous.

In just a few days, Moon finds herself overwhelmed by her secret powers and bombarded by strange thoughts, including those of a mysterious dragon who might be a terrible enemy. And when someone starts attacking dragons within the academy, Moon has a choice to make: Stay hidden and safe? Or risk everything to save her new friends?

Tui T. Sutherland is the author of several books for young readers, including the Menagerie trilogy, the Pet Trouble series, and three books in the bestselling Seekers series (as part of the Erin Hunter team). In 2009, she was a two-day champion on JEOPARDY! She lives in Massachusetts with her wonderful husband, two adorable sons, and one very patient dog. To learn more about Tui's books, visit her online at www.tuibooks.com.

Praise for WINGS OF FIRE BOOK TWO:
"[A] perfect adventure for young fantasy fans to sink their teeth into." --SCHOOL LIBRARY JOURNAL

Praise for WINGS OF FIRE BOOK ONE:
"Dramatic battle scenes, double-crosses, and one seriously deranged queen makes WINGS OF FIRE a series that should have broad appeal for middle-grade fantasy fans." --BOOKLIST

"Fast-paced and detailed, this first installment in a new adventure series is entertaining." --KIRKUS

"Readers of all ages will be enchanted by the humanistic storyline and the page-turning excitement." --LIBRARY MEDIA CONNECTION

This feature require that you enable JavaScript in your browser.
END_OF_DOCUMENT_TOKEN_TO_BE_REPLACED

This feature require that you enable JavaScript in your browser.
END_OF_DOCUMENT_TOKEN_TO_BE_REPLACED