The Scandal of the Century: And Other Writings (Vintage International) (Paperback) 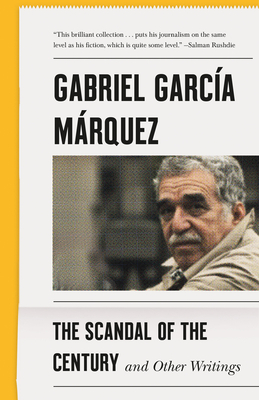 Collected here for the first time: a selection of the great writer's journalism, which he considered more important to his legacy than his acclaimed novels.

Late in his life, Gabriel García Márquez declared: “I don’t want to be remembered for One Hundred Years of Solitude, nor for the Nobel Prize, but rather for the newspaper. I was born a journalist. . . . It’s in my blood.”  Now available for the first time in English, this selection offers a glimpse into the great novelist’s career as a reporter. Ranging from the early pieces he wrote while starting out in Colombia to his longer reportage from Paris and Rome and, later on, from Venezuela and Mexico, these fifty journalistic writings amply display the narrative gifts that made his reputation. The Scandal of the Century is a tribute to García Márquez’s dedication to the profession he believed to be “the best in the world.”

Gabriel García Márquez was born in Colombia in 1927. He was awarded the Nobel Prize in Literature in 1982. He is the author of many works of fiction and nonfiction, including One Hundred Years of Solitude and Love in the Time of Cholera. He died in 2014.

“This brilliant collection . . . puts his journalism on the same level as his fiction, which is quite some level.” —Salman Rushdie

“The Scandal of the Century demonstrate[s] that his forthright, lightly ironical voice just seemed to be there, right from the start. . . . He had a way of connecting the souls in all his writing, fiction and nonfiction, to the melancholy static of the universe.” —The New York Times

“This collection is a master class on how to write for a newspaper: lush, vivid columns full of information, irony, whimsy, humor, skepticism and rumination, just what one would expect.” —Seymour M. Hersh

This feature require that you enable JavaScript in your browser.
END_OF_DOCUMENT_TOKEN_TO_BE_REPLACED

This feature require that you enable JavaScript in your browser.
END_OF_DOCUMENT_TOKEN_TO_BE_REPLACED