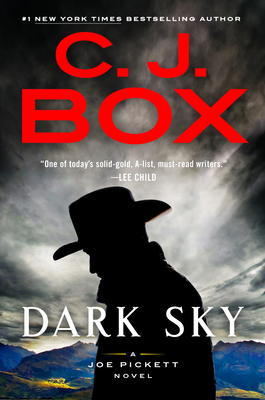 This is book number 21 in the A Joe Pickett Novel series.

Wyoming game warden Joe Pickett must accompany a Silicon Valley CEO on a hunting trip--but soon learns that he himself may be the hunted--in the thrilling new novel from #1 New York Times bestselling author C. J. Box.

When the governor of Wyoming gives Joe Pickett the thankless task of taking a tech baron on an elk hunting trip, Joe reluctantly treks into the wilderness with his high-profile charge. But as they venture into the woods, a man-hunter is hot on their heels, driven by a desire for revenge. Finding himself without a weapon, a horse, or a way to communicate, Joe must rely on his wits and his knowledge of the outdoors to protect himself and his companion.
Meanwhile, Joe's closest friend, Nate Romanowski, and his own daughter Sheridan learn of the threat to Joe's life and follow him into the woods. In a stunning final showdown, the three of them come up against the worst that nature--and man--have to offer.

C. J. Box is the author of twenty Joe Pickett novels, six stand-alone novels, and a story collection. He has won the Edgar, Anthony, Macavity, Gumshoe, and Barry Awards, as well as the French Prix Calibre .38, and has been a Los Angeles Times Book Prize finalist. A Wyoming native, Box has also worked on a ranch and as a small-town newspaper reporter and editor. He lives outside Cheyenne with his family. His books have been translated into twenty-seven languages. He’s an executive producer of ABC TV’s Big Sky, which is based on his Cody Hoyt/Cassie Dewell novels, as well as executive producer of the upcoming Joe Pickett television series for Paramount Studios/Spectrum Originals.

"A strong entry in this long-running and wildly popular series. Box's novels have been translated into 27 languages and regularly appear on best-seller lists, a testament to the strength of his writing and the popularity of the melding of western and crime genres."--Booklist

This feature require that you enable JavaScript in your browser.
END_OF_DOCUMENT_TOKEN_TO_BE_REPLACED

This feature require that you enable JavaScript in your browser.
END_OF_DOCUMENT_TOKEN_TO_BE_REPLACED