The Escoffier Cookbook: and Guide to the Fine Art of Cookery for Connoisseurs, Chefs, Epicures (International Cookbook Series) (Hardcover) 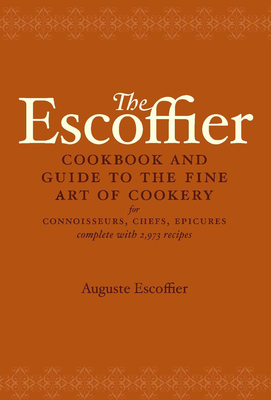 An American translation of the definitive Guide Culinaire, the Escoffier Cookbook includes weights, measurements, quantities, and terms according to American usage. Features 2,973 recipes.

Auguste Escoffier (1946–1935) was a French chef considered to be the father of haute cuisine. Much of his culinary technique was a simplified and modernized version of Marie-Antoine Carême's elaborate style. Escoffier's 1903 text Le Guide Culinaire is still used as both a cookbook and a textbook today. He helped codify the five fundamental "mother sauces" of French cuisine: béchamel, espagnole, velouté, hollandaise, and tomate. Kaiser Wilhelm II called him the "Emperor of Chefs."

This feature require that you enable JavaScript in your browser.
END_OF_DOCUMENT_TOKEN_TO_BE_REPLACED

This feature require that you enable JavaScript in your browser.
END_OF_DOCUMENT_TOKEN_TO_BE_REPLACED