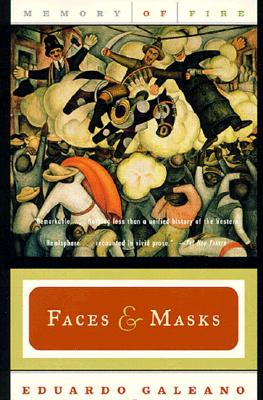 By Eduardo Galeano, Cedric Belfrage (Translated by)
$16.95
Email or call for price.

"From pre-Columbian creation myths and the first European voyages of discovery and conquest to the Age of Reagan, here is 'nothing less than a unified history of the Western Hemisphere... recounted in vivid prose.'"--The New Yorker

A unique and epic history, Eduardo Galeano's Memory of Fire trilogy is an outstanding Latin American eye view of the making of the New World. From its first English language publication in 1985 it has been recognized as a classic of political engagement, original research, and literary form.

Eduardo Galeano (1940—2015) was the author of Open Veins of Latin America, Days and Nights of Love and War, The Book of Embraces, We Say No, and other works.

Cedric Belfrage was an author, journalist, translator, and co-founder of the radical weekly newspaper the National Guardian. English by birth, he was deported by the U.S. government back to England in 1955, and later became the translator for the Uruguayan author Eduardo Galeano.

[Memory of Fire] will reveal to you the meaning of the New World as it was, and of the world as we have it now.

A book as fascinating as the history it relates.... Galeano is a satirist, realist, and historian, and... deserves mention alongside John Dos Passos, Bernard DeVoto, and Gabriel Garcia Marquez.
— Los Angeles Times

Memory of Fire is devastating, triumphant... sure to scorch the sensibility of English-language readers.

An epic work of literary creation... there could be no greater vindication of the wonders of the lands and people of Latin America than Memory of Fire.

This feature require that you enable JavaScript in your browser.
END_OF_DOCUMENT_TOKEN_TO_BE_REPLACED

This feature require that you enable JavaScript in your browser.
END_OF_DOCUMENT_TOKEN_TO_BE_REPLACED