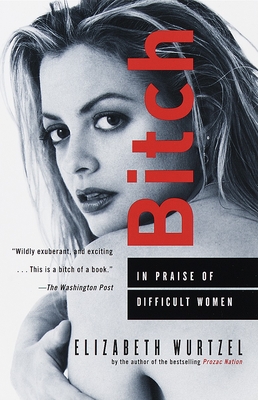 By Elizabeth Wurtzel
Email or call for price
Backordered

From the author of the bestselling Prozac Nation comes one of the most entertaining feminist manifestos ever written. In five brilliant extended essays, she links the lives of women as demanding and disparate as Amy Fisher, Hillary Clinton, Margaux Hemingway, and Nicole Brown Simpson. Wurtzel gives voice to those women whose lives have been misunderstood, who have been dismissed for their beauty, their madness, their youth.

Bitch is a brilliant tract on the history of manipulative female behavior. By looking at women who derive their power from their sexuality, Wurtzel offers a trenchant cultural critique of contemporary gender relations. Beginning with Delilah, the first woman to supposedly bring a great man down (latter-day Delilahs include Yoko Ono, Pam Smart, Bess Myerson), Wurtzel finds many biblical counterparts to the men and women in today's headlines.

She finds in the story of Amy Fisher the tragic plight of all Lolitas, our thirst for their brief and intense flame. She connects Hemingway's tragic suicide to those of Sylvia Plath, Edie Sedgwick, and Marilyn Monroe, women whose beauty was an end, ultimately, in itself. Wurtzel, writing about the wife/mistress dichotomy, explains how some women are anointed as wife material, while others are relegated to the role of mistress. She takes to task the double standard imposed on women, the cultural insistence on goodness and society's complete obsession with badness: what's a girl to do? Let's face it, if women were any real threat to male power, "Gennifer Flowers would be sitting behind the desk of the Oval Office," writes Wurtzel, "and Bill Clinton would be a lounge singer in the Excelsior Hotel in Little Rock."

Bitch tells a tale both celebratory and cautionary as Wurtzel catalogs some of the most infamous women in history, defending their outsize desires, describing their exquisite loneliness, championing their take-no-prisoners approach to life and to love. Whether writing about Courtney Love, Sally Hemings, Bathsheba, Kimba Wood, Sharon Stone, Princess Di--or waxing eloquent on the hideous success of The Rules, the evil that is The Bridges of Madison County, the twisted logic of You'll Never Make Love in This Town Again--Wurtzel is back with a bitchography that cuts to the core. In prose both blistering and brilliant, Bitch is a treatise on the nature of desperate sexual manipulation and a triumph of pussy power.

Elizabeth Wurtzel is the author of the bestselling books Prozac Nation, Bitch, and More, Now, Again. A Harvard graduate whose work has appeared in such publications as The New Yorker, New York, The Guardian, and The Oxford American, she lives in New York City.

This feature require that you enable JavaScript in your browser.
END_OF_DOCUMENT_TOKEN_TO_BE_REPLACED

This feature require that you enable JavaScript in your browser.
END_OF_DOCUMENT_TOKEN_TO_BE_REPLACED