In the Shadow of the Fallen Towers: The Seconds, Minutes, Hours, Days, Weeks, Months, and Years after the 9/11 Attacks (Hardcover) 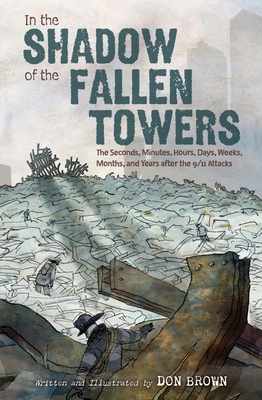 A graphic novel chronicling the immediate aftermath and rippling effects of one of the most impactful days in modern history: September 11, 2001. From the Sibert Honor– and YALSA Award–winning creator behind The Unwanted and Drowned City.

The consequences of the terrorist attack on the World Trade Center in New York City, both political and personal, were vast, and continue to reverberate today. Don Brown brings his journalistic eye and attention to moving individual stories to help teens contextualize what they already know about the day, as well as broaden their understanding of the chain of events that occurred in the attack’s wake.

Profound, troubling, and deeply moving, In the Shadow of the Fallen Towers bears witness to our history—and the ways it shapes our future.

Don Brown is the YALSA excellence in nonfiction and Sibert Honor award-winning author and illustrator of many nonfiction graphic novels for teens and picture book biographies. He has been widely praised for his resonant storytelling and his delicate watercolor paintings that evoke the excitement, humor, pain, and joy of lives lived with passion. School Library Journal has called him "a current pacesetter who has put the finishing touches on the standards for storyographies." He lives in New York with his family.

★ “Notable is Brown’s ability to depict, in this economical format, the event’s wide-ranging aftereffects, including Islamophobia, the physical and mental health toll on workers dismantling “the Pile,” and U.S. soldiers ending up on horseback in Afghanistan.” –Publishers Weekly, starred review  “An award-winning author/illustrator again masterfully applies his journalistic eye and art style to give facts, raise questions and put events into fresh perspective.” –San Francisco Chronicle "With striking illustrations and immersive storytelling, this is a helpful primer for young readers who want to learn about the significance of 9/11." -- The New York Times   ★ "Once again, Brown shows his mastery of the graphic format for portraying humanity in the most trying of circumstances." -- The Horn Book, starred review   "A deeply moving account of the immediate aftermath and lasting effects of the largest terrorist attack on United States soil." -- Kirkus   "A succinct and impactful look at one of America’s worst tragedies, skillfully rendered by one of comics journalism’s best."—School Library Journal    —

This feature require that you enable JavaScript in your browser.
END_OF_DOCUMENT_TOKEN_TO_BE_REPLACED

This feature require that you enable JavaScript in your browser.
END_OF_DOCUMENT_TOKEN_TO_BE_REPLACED