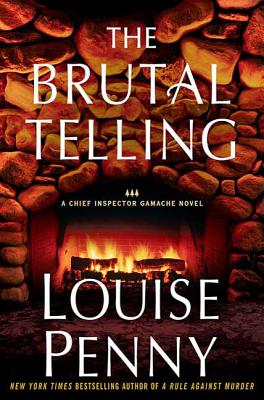 This is book number 5 in the Chief Inspector Gamache Novel series.

“Louise Penny just keeps getting better and better. In her latest installment in the Chief Inspector Gamache series, she creates a satisfying read that is impossible to put down. Once again in the remote Canadian village of Three Pines, Gamache's team is summoned when an unknown dead man is found in the town's favorite bistro. Gamache searches near and far to unravel the mystery, yet the most intriguing journey is the one into the killer's mind.”
— Sally Morrison, Sierra Madre Books, Sierra Madre, CA

With those words the peace of Three Pines is shattered. As families prepare to head back to the city and children say goodbye to summer, a stranger is found murdered in the village bistro and antiques store. Once again, Chief Inspector Gamache and his team are called in to strip back layers of lies, exposing both treasures and rancid secrets buried in the wilderness.

No one admits to knowing the murdered man, but as secrets are revealed, chaos begins to close in on the beloved bistro owner, Olivier. How did he make such a spectacular success of his business? What past did he leave behind and why has he buried himself in this tiny village? And why does every lead in the investigation find its way back to him?

As Olivier grows more frantic, a trail of clues and treasures— from first editions of Charlotte's Web and Jane Eyre to a spider web with the word "WOE" woven in it—lead the Chief Inspector deep into the woods and across the continent in search of the truth, and finally back to Three Pines as the little village braces for the truth and the final, brutal telling.

LOUISE PENNY is the author of the #1 New York Times and Globe and Mail bestselling series of Chief Inspector Armand Gamache novels. She has won numerous awards, including a CWA Dagger and the Agatha Award (six times), and was a finalist for the Edgar Award for Best Novel. In 2017, she received the Order of Canada for her contributions to Canadian culture. Louise lives in a small village south of Montréal.

This feature require that you enable JavaScript in your browser.
END_OF_DOCUMENT_TOKEN_TO_BE_REPLACED

This feature require that you enable JavaScript in your browser.
END_OF_DOCUMENT_TOKEN_TO_BE_REPLACED