Outsmarting the Sociopath Next Door: How to Protect Yourself Against a Ruthless Manipulator (Hardcover) 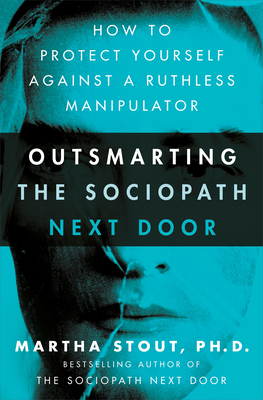 From Dr. Martha Stout's influential work The Sociopath Next Door, we learned how to identify a sociopath. Now she tells us what we actually can do about it.

“Mandatory reading on how to effectively deal with sociopaths before you get hurt.”—Joe Navarro, former FBI special agent and the author of Dangerous Personalities

While the best way to deal with a sociopath is to avoid him or her entirely, sometimes circumstance doesn't allow for that. What happens when the time comes to defend yourself against your own child, a ruthless ex-spouse, a boss or another person in power? Using the many chilling and often heartbreaking emails and letters she has received over the years, Dr. Martha Stout uncovers the psychology behind the sociopath's methods and provides concrete guidelines to help navigate these dangerous interactions.

Organized around categories such as destructive narcissism, violent sociopaths, sociopathic coworkers, sociopathy in business and government, and the sociopath in your family, Outsmarting the Sociopath Next Door contains detailed explanation and commentary on how best to react to keep the sociopath at bay. Uniting these categories is a discussion of changing psychological theories of personality and sociopathy and the enduring triumph of conscience over those who operate without empathy or concern for others. By understanding the person you're dealing with and changing the rules of the game, you'll be able to gain the upper hand and escape the sociopath's influence.

Whether you're fighting a custody battle against a sociopathic ex or being gaslighted by a boss or coworker, you'll find hope and help within these pages. With this guide to disarming the conscienceless, Dr. Stout provides an incisive new examination of human behavior and conceptions of normality, and gives readers the tools needed to protect themselves.

Martha Stout, Ph.D., served on the faculty in psychology in the department of psychiatry at Harvard Medical School for more than twenty-five years and was a clinical associate at the Massachusetts General Hospital in Boston. She practiced as a clinical psychologist specializing in recovery from psychological trauma and PTSD. Dr. Stout has taught psychology at the Graduate Faculty of the New School for Social Research in New York, the Massachusetts School of Professional Psychology, and Wellesley College. She is the author of, among numerous other publications, The Sociopath Next Door, The Paranoia Switch, and The Myth of Sanity.

“Dr. Stout's book is mandatory reading on how to effectively deal with sociopaths before you get hurt.”—Joe Navarro, former FBI special agent and the author of Dangerous Personalities

Praise for The Sociopath Next Door

“It sounds like a treatment for a creepy psychological thriller: a world in which one in every 25 people walks through life without a drop of human compassion . . . [But] Martha Stout, Ph.D., says this is not science fiction. . . . Stout claims that 4 percent of the population are sociopaths who have no capacity to love or empathize . . . Stout details the havoc sociopaths wreak on unsuspecting individuals—marrying for money, backstabbing co-workers, or simply messing with people for the fun of it.”—Sara Eckel, Salon

“What do the confidence man, the impostor and the serial killer have in common? As Martha Stout points out in The Sociopath Next Door, they are all missing something essential: a conscience.”—John Rooney, Ph.D., Philadelphia Inquirer

“A chilling portrait of human beings who lack scruples the way someone born blind lacks eyesight . . . Stout describes respected professionals who tell outrageous lies simply to confuse colleagues . . . authority figures who deceive, seduce and even murder just to relieve the boredom that is the usual state of the sociopathic mind. A useful—if appalling—guide to help you recognize conscienceless individuals . . . [and] a heartening affirmation of the empathic mindset that comes naturally to the vast majority of humans.”—Martha Beck, O: The Oprah Magazine

“Stout’s well-researched and carefully conceptualized book on conscience is thought-provoking and spiritually satisfying. Her finding, that conscience comes from loving people, is just what we need to know in these dark and angry times.”—Mary Pipher, Ph.D., author of Letters to a Young Therapist and Reviving Ophelia

“A practicing psychologist, Stout has seen too many lives hurt by the conscienceless few, so she’s out to alert the ‘good people.’ Her book is alarming. It’s a call to arms, a plea for vigilance on the part of people of conscience so they will recognize the ruthless among them.”—Rob Mitchell, Boston Herald

This feature require that you enable JavaScript in your browser.
END_OF_DOCUMENT_TOKEN_TO_BE_REPLACED

This feature require that you enable JavaScript in your browser.
END_OF_DOCUMENT_TOKEN_TO_BE_REPLACED