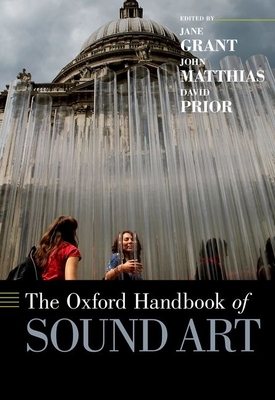 Sound art has long been resistant to its own definition. Emerging from a liminal space between movements of thought and practice in the twentieth century, sound art has often been described in terms of the things that it is understood to have left behind: a space between music, fine art, and
performance. The Oxford Handbook of Sound Art surveys the practices, politics, and emerging frameworks of thought that now define this previously amorphous area of study. Throughout the Handbook, artists and thinkers explore the uses of sound in contemporary arts practice. Imbued with global perspectives, chapters are organized in six overarching themes of Space, Time, Things, Fabric, Senses and Relationality. Each theme represents a key area of development in the
visual arts and music during the second half of the twentieth century from which sound art emerged. By offering a set of thematic frameworks through which to understand these themes, this Handbook situates constellations of disparate thought and practice into recognized centers of activity.

Jane Grant is an award-winning artist. She was co-creator of The Fragmented Orchestra with John Matthias and Nick Ryan, winner of the PRSF New Music Award in 2008. Her artwork Ghost was premiered at ISEA Istanbul 2011. Plasticity, a collaborative work with John Matthias, Kin, and Nick Ryan was atthe BFI, onedotzero festival, and Google Campus, London. Grant, alongside Matthias, was commissioned to create the sonic artwork Fathom. Grant has recently been developing artworks in AR and immersive environments resulting in her new work Between Us with Magic Leap. Her current artworks are aboutdesire, astrophysics, and haunting, including How to Disappear Completely. John Matthias is an award-winning musician and composer and is currently Head of Research at dbs-i, an innovation lab in sound and music. As Associate Professor at The University of Plymouth, UK for 15 years, he was one of 14 PIs on the 4.1 million EU Marie Curie Project 'Cognovo', which exploredCognitive Innovation from an interdisciplinary perspective and he has also initiated funded projects with The Wellcome Trust, Arts Council England, EPSRC and The PRS for Music Foundation. He has released seven albums via Accidental, Ninja Tune, Nonclassical, Village Green, Sony and Welfare State. Hehas collaborated with many artists including Radiohead (The Bends) and Coldcut (Man in a Garage) and has had his music remixed by many artists including Thom Yorke, Matthew Herbert and Jem Finer (The Pogues). In 2008 he won the UK PRS Foundation New Music Award (The 'Turner Prize for Music') withJane Grant and Nick Ryan for 'The Fragmented Orchestra' which led to the development of The Neurogranular Sampler Audio Unit and the 'Plasticity' sound installation at the BFI and Google Campus Building, London. He has performed Internationally at many venues including The Royal Opera House London, The Centre Georges Pompidou (Paris) and Le Poisson Rouge (New York City) and has contributed music to 12 feature film scores. David Prior is a musician and artist. With Architect Frances Crow, he is a partner in liminal, a practice that explores the relationship between sound, listening, and space (liminal.org.uk). Prior is Professor of Music and Sound Art and Director of Research at Falmouth University.

This feature require that you enable JavaScript in your browser.
END_OF_DOCUMENT_TOKEN_TO_BE_REPLACED

This feature require that you enable JavaScript in your browser.
END_OF_DOCUMENT_TOKEN_TO_BE_REPLACED