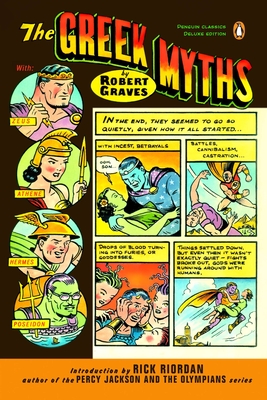 The gold standard in Greek mythology, in a dazzling Graphic Deluxe Edition with a new introduction by the bestselling author of the Percy Jackson and the Olympians series

From the creation of the world out of Chaos and the birth of the Olympians to the Trojan War and Odysseus's return, Robert Graves's superb retelling of the Greek myths has long been acclaimed as the definitive edition. Graves draws on sources scattered throughout ancient literature, using a novelist's skill to weave a crisp, coherent narrative of each myth and providing commentaries with cross-references, interpretations, and explanations based on solid scholarship. The result is a classic volume of many of the greatest stories ever told—stories of the gods, heroes, and extraordinary events that inspired Homer, the Greek tragedians, and so much of subsequent European literature.

For more than seventy years, Penguin has been the leading publisher of classic literature in the English-speaking world. With more than 1,700 titles, Penguin Classics represents a global bookshelf of the best works throughout history and across genres and disciplines. Readers trust the series to provide authoritative texts enhanced by introductions and notes by distinguished scholars and contemporary authors, as well as up-to-date translations by award-winning translators.

Robert Graves (1895–1985) is the author of the historical novel I, Claudius, the classic war memoir Goodbye to All That, and more than 140 other published works, including translations of Homer and Suetonius for Penguin Classics.

Rick Riordan is the #1 New York Times bestselling author of the Percy Jackson and the Olympians series, the Kane Chronicles, and the Heroes of Olympus. More than twenty million copies of his books are in print. After teaching middle school English and history for fifteen years, he now writes full time in San Antonio, Texas, where he lives with his wife and two sons.

Ross MacDonald is an illustrator, comic-book artist, and contributing editor of the Virginia Quarterly Review whose illustrations have appeared in The New Yorker, Vanity Fair, Newsweek, and Time, among other magazines. He lives in Connecticut.

This feature require that you enable JavaScript in your browser.
END_OF_DOCUMENT_TOKEN_TO_BE_REPLACED

This feature require that you enable JavaScript in your browser.
END_OF_DOCUMENT_TOKEN_TO_BE_REPLACED