Sapiens: A Graphic History, Volume 2: The Pillars of Civilization (Paperback) 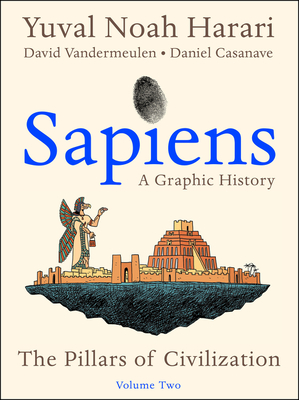 This second volume of Sapiens: A Graphic History, the full-color graphic adaptation of Yuval Noah Harari’s #1 New York Times bestseller, focuses on the Agricultural Revolution—when humans fell into a trap we’ve yet to escape: working harder and harder with diminishing returns.

What if humanity’s major woes—war, plague, famine and inequality—originated 12,000 years ago, when Homo sapiens converted from nomads to settlers, in pursuit of the fantasy of productivity and efficiency? What if by seeking to control plants and animals, humans ended up being controlled by kings, priests, and Kafkaesque bureaucracy? Volume 2 of Sapiens: A Graphic History–The Pillars of Civilization explores a crucial chapter in human development: the Agricultural Revolution. This is the story of how wheat took over the world; how an unlikely marriage between a god and a bureaucrat created the first empires; and how war, plague, famine, and inequality became an intractable feature of the human condition.

But it’s not all doom and gloom with this book’s cast of entertaining characters and colorful humorous scenes. Yuval, Zoe, Prof. Saraswati, Cindy and Bill (now farmers), Detective Lopez, and Dr. Fiction, all introduced in Volume 1, once again travel the length and breadth of human history, this time investigating the impact the Agricultural Revolution has had on our species. The cunning Mephisto shows them how to ensnare humans, King Hammurabi lays down the law, and Confucius explains harmonious society. The origins of modern farming are introduced through Elizabethan tragedy; the changing fortunes of domesticated plants and animals are tracked in the columns of the Daily Business News; the story of urbanization is portrayed as a travel brochure, offering discount journeys to ancient Babylon and China; and the history of inequality unfolds in a superhero detective story; with guest appearances by historical and cultural personalities throughout such as Thomas Jefferson, Scarlett O'Hara, Margaret Thatcher, and John Lennon.

Sapiens: A Graphic History, Volume 2 is a radical, witty and colorful retelling of the story of humankind for adults and young adults, and can be read on its own or in sequence with Volume I.

Prof. Yuval Noah Harari is a historian, philosopher, and the bestselling author of Sapiens: A Brief History of Humankind, Homo Deus: A Brief History of Tomorrow, 21 Lessons for the 21st Century, and Sapiens: A Graphic History. His books have sold over 35 million copies in 65 languages, and he is considered one of the world’s most influential public intellectuals today. The Guardian has credited Sapiens with revolutionizing the non-fiction market and popularizing “brainy books”.

In 2020 Harari joined forces with renowned comics artists David Vandermeulen and Daniel Casanave, to create Sapiens: A Graphic History: a radical adaptation of the original Sapiens into a graphic novel series. This illustrated collection casts Yuval Noah Harari in the role of guide, who takes the reader through the entire history of the human species, accompanied by a range of fictional characters and traveling through time, space and popular culture references.

Born in Haifa, Israel, in 1976, Harari received his PhD from the University of Oxford in 2002, and is currently a lecturer at the Department of History, the Hebrew University of Jerusalem. He originally specialized in world history, medieval history and military history, and his current research focuses on macro-historical questions such as: What is the relationship between history and biology? What is the essential difference between Homo sapiens and other animals? Is there justice in history? Does history have a direction? Did people become happier as history unfolded? What ethical questions do science and technology raise in the 21st century?

"A skillfully entertaining education.....Throughout, the authors seek to present a concise rendering of the full march of humankind and point out elements that are fictionalized, misrepresented, or exaggerated—and show how those elements have shaped human behavior, norms, and mores. " — Kirkus Reviews (starred review)

This feature require that you enable JavaScript in your browser.
END_OF_DOCUMENT_TOKEN_TO_BE_REPLACED

This feature require that you enable JavaScript in your browser.
END_OF_DOCUMENT_TOKEN_TO_BE_REPLACED