Starlight Enclave: A Novel (The Way of the Drow #1) (Hardcover) 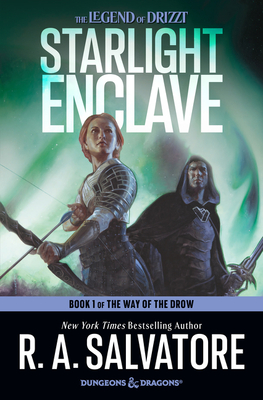 After the settling dust of the demon uprising and two years of peace, rumblings from the Menzoberranzan drow have Jarlaxle nervous. Worried his allies may be pulled into a Civil War between the great Houses, he is eager to ensure Zaknafein is armed with weapons befitting his skill, including one in particular: Khazid’hea. A powerful artifact, the sword known as “Cutter” has started wars, corrupted its users, and spilled the blood of many, many people. Nonetheless—or maybe because of that—the rogue Jarlaxle and a small group of friends will go on an expedition looking for the weapon’s last wielder, Doum’wielle, in the freezing north, for she may be the key to unlocking the sword’s potential…and perhaps the key to preventing the bloodshed looming over the Underdark.

And as they explore the top of the world, Drizzt is on a journey of his own—both spiritual and physical. He wants to introduce his daughter Brie to Grandmaster Kane and the practices that have been so central to his beliefs. But, having only recently come back from true transcendence, the drow ranger is no longer sure what his beliefs mean anymore. He is on a path to determining the future, not just for his family, but perhaps the entire northlands of the Realms themselves.

And no matter the outcome of either journey, the Realms will never be the same again.

Thirty-four years ago, R. A. Salvatore created the character of Drizzt Do’Urden, the dark elf who has withstood the test of time to stand today as an icon in the fantasy genre. With his work in the Forgotten Realms, the Crimson Shadow, the DemonWars Saga, and other series, Salvatore has sold more than thirty million books worldwide and has appeared on the New York Times bestseller list more than two dozen times. He considers writing to be his personal journey, but still, he’s quite pleased that so many are walking the road beside him! R.A. lives in Massachusetts with his wife, Diane, and their two dogs, Dexter and Pikel. He still plays softball for his team, Clan Battlehammer, and enjoys his weekly DemonWars: Reformation RPG and Dungeons & Dragons 5e games. Salvatore can be found at RASalvaStore.com

"Longtime fans of Drizzt Do’Urden will surely enjoy the novel’s breakneck pacing, nonstop action, cast of familiar and beloved characters, and deep philosophical exploration throughout. This storyline, in particular, packs a thematic wallop that is both timely and timeless...readers should embrace Salvatore’s newest adventure with Drizzt and company."
— Kirkus Reviews (starred review) on Starlight Enclave

"Salvatore manages to wrangle the extensive backstory to make this an accessible entry point for first-timers, and the superior characterizations that marked Salvatore’s prior books are again in evidence. His many devoted fans have reason to anticipate the sequel."
— Publishers Weekly on Starlight Enclave

“The exhilarating conclusion to Salvatore’s Generations trilogy (after Boundless) illustrates the power of family, both born and chosen … Amid epic sword and sorcery clashes, Salvatore makes a powerful case for love and compassion conquering even the strongest of evils. Fans will be sad to see this fantastic series end.”
— Publishers Weekly (starred review) on Relentless

“The newest evolution of a narrative that’s grown and developed for nearly three decades...a payoff for all that preceded it.”
— NerdsonEarth.com on Relentless

"Salvatore... makes this an accessible entry point for first-timers, and the superior characterizations that marked Salvatore’s prior books are again in evidence. His many devoted fans have reason to anticipate the sequel."
— Publishers Weekly

“Boundless picks up right where Timeless left off and sustains the vibrant heartbeat of the saga.”
— NerdsonEarth.com

This feature require that you enable JavaScript in your browser.
END_OF_DOCUMENT_TOKEN_TO_BE_REPLACED

This feature require that you enable JavaScript in your browser.
END_OF_DOCUMENT_TOKEN_TO_BE_REPLACED