A Blizzard of Polar Bears: A Novel of Suspense (Alex Carter Series #2) (Hardcover) 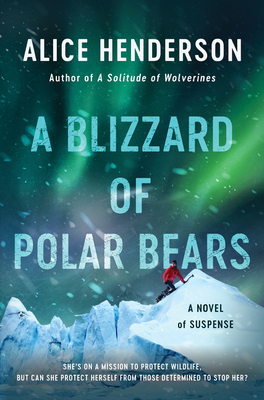 This is book number 2 in the Alex Carter Series series.

Wildlife biologist Alex Carter is back, fighting for endangered species in the Canadian Arctic and battling for her life in this action-packed follow-up to A Solitude of Wolverines, “a true stunner of a thriller debut” (James Rollins) and “a great read” (Nevada Barr).

Fresh off her wolverine study in Montana, wildlife biologist Alex Carter lands a job studying a threatened population of polar bears in the Canadian Arctic. Embedded with a small team of Arctic researchers, she tracks the majestic bears by air, following them over vast, snowy terrain, spending days leaning precariously out of a helicopter with a tranquilizer gun, until she can get down on the ice to examine them up close.

But as her study progresses, and she gathers data on the health of individual bears, things start to go awry. Her helicopter pilot quits unexpectedly, equipment goes missing, and a late-night intruder breaks into her lab and steals the samples she’s collected. She realizes that someone doesn’t want her to complete her study, but Alex is not easily deterred.

Managing to find a replacement pilot, she returns to the icy expanses of Hudson Bay. But the helicopter catches fire in midflight, forcing the team to land on a vast sheet of white far from civilization. Surviving on the frozen landscape is difficult enough, but as armed assailants close in on snowmobiles, Alex must rely on her skills and tenacity to survive this onslaught and carry out her mission.

"Action-packed doesn’t begin to describe A Blizzard of Polar Bears....The swift-paced book is hard to put down."
— Denver Post

“[A] swift-paced and fact-packed outdoors thriller.” — Fresh Fiction on A Blizzard of Polar Bears

Henderson manages to marry both suspense and mystery in this book, featuring a classic, suspense-driven fight-and-flight with several overarching mysteries. It’s even better than the excellent first book in the series, A Solitude of Wolverines. — First Clue

“It’s not often that a novel can combine thrilling action with fascinating characters and a setting that is depicted so precisely that we shiver while reading about venturing out onto pack ice in Northern Canada. Alice Henderson accomplishes all that and more in A Blizzard of Polar Bears…gripping…exquisitely expressed…difficult to put down.” — BookReporter.com

“What a treat! Alice Henderson has delivered a treasure of a novel—and, to readers’ delight, a promise of more where this came from. Her depiction of the natural world in all its beauty and terror is spot-on. Into this she weaves a cast of characters both original and fascinating, as well as a heroine who does the unbelievable, yet one can believe it. A great read!”
— Nevada Barr on A Solitude of Wolverines

“With a plot and character arc that leap from the frying pan into the fire, A Solitude of Wolverines sizzles with action, dripping with the kind of characters and environs that make for a long-lasting series in which readers can really sink their teeth.”  — Craig Johnson

“A true stunner of a thriller debut...It’s so fraught with excitement and wondrous details that it demands to be read in one sitting and savored afterward. Don’t miss it.” — James Rollins on A Solitude of Wolverines

“A Solitude of Wolverines by Alice Henderson is a thriller with a heart, a riveting story of conspiracy, murder, and wilderness survival that will keep you turning the pages. Vivid characters, a pulse-pounding plot, a fascinating wildlife-conservation background, and beautifully realized settings make this an exceptional read. This is the first book in a series about wildlife biologist Alex Carter; I can’t wait for the next one.”
— Douglas Preston, #1 bestselling coauthor of Relic and Crooked River.

“The novel is packed with action. Alex is smart, with an impressive knowledge of wildlife as well as guns and self-defense tactics. It’s no plot spoiler to say she survives and will be back.”
— Denver Post on A Solitude of Wolverines

“Alice Henderson has proven she is a true master of suspense. A Solitude of Wolverines is not for the faint of heart. It is a compelling, nail-biting story that kept me on the edge of my seat from the very first page. I couldn’t put it down." — —Owl Goingback, Bram Stoker Award-winning author of Coyote Rage

"A Solitude of Wolverines is a rare species indeed: an edge-of-your-seat thriller that engages not just the adrenaline glands but the heart and soul as well. With an engaging heroine, an incredible setting and pulse-pounding action, this one is truly a breed apart." — —Lisa Morton, six-time Bram Stoker Award winner

"A thriller that combines non-stop, breathtaking action with lyrical descriptions of a haunting landscape. I could not put it down.” — —Terry Shames, author of the award-winning Samuel Craddock series

"Looking for a little action with your activism? A Solitude of Wolverines delivers in spades. A page-turning read that will definitely leave you guessing. Alice Henderson is an author to watch!" — —Michael Laurence, author of The Annihilation Protocol

"Alice Henderson at this point takes what might have been the first animal-activist/naturalist thriller I can recall and combines chills, thrills, and heart right up through the breathless finale. I look forward to the next Alex Carter novel!" — CriminalElement.com

“Best thriller of the year so far. Seriously.” — Fresh Fiction

This feature require that you enable JavaScript in your browser.
END_OF_DOCUMENT_TOKEN_TO_BE_REPLACED

This feature require that you enable JavaScript in your browser.
END_OF_DOCUMENT_TOKEN_TO_BE_REPLACED